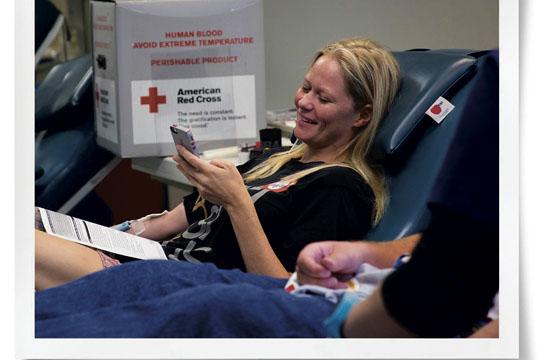 The American Red Cross held a blood drive on Wednesday, Oct.1 at the Red Cross blood donation center in Santa Monica with attendees receiving plenty of perks for their blood and time.

Twenty-two walk-ins and people with appointments showed up between the hours of 2 pm and 8:15 pm, and 16 units of blood were collected.

People donated either one unit, or pint of blood, or made a double red blood cell donation, which is where two pints of red blood cells are collected.

The amount of people donating varies from blood drive to blood drive.

All the donors were able to save up to three lives with each unit of blood donated. They received tickets to the Laugh Factory, Squeaky Clean at the Ontario Improv, and a $5 coupon for El Torito. Donors also received vouchers for tickets to the Grammy museum and USC football games.

“Every month, there are different giveaways. Every donor who presents, who checks in, gets it whether they get deferred or are unable to donate today or not,” said Genens.

After the potential donors are registered, they sit down at a lounge area in the middle of the room. There, they are able to help themselves to complimentary snacks and beverages, such as crackers, fudge sticks, and cranberry juice.

The first donor was finished about 90 minutes into the blood drive. Tiffany Kucura, who is an assistant manager at American Laser Skincare, donated for the second time and plans to do so regularly.

“I work a block away, and I figured if it’s this easy, why not?” she said.

Not everyone, however, is able to donate: adults wishing to donate a pint of blood should weigh at least 110lbs.

There are rules that dictate the height and weight of an individual wishing to become a donor.

The pamphlet also described what blood types were needed. It stated that type O blood is always in high demand because it is “the universal blood type.” Donors with A- and B- blood types were able to give double donations.

Many of the donors participated out of a feeling of moral obligation.

“My blood type is O- and it’s universal, so I think I’d feel badly if I didn’t,” said Anne Youngblood, a Brentwood child advocate who has donated close to a dozen times in the past.

The donation center, which is located next to the Avis on the corner of 11th Street and Broadway, holds blood donations on the first Wednesday of every month, and then on each consecutive Monday until the start of the new month.