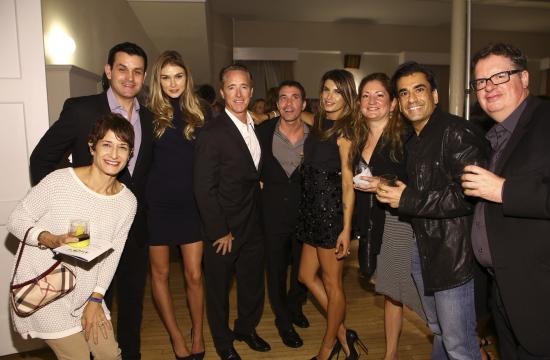 If you are wondering where Elisabetta Canalis was on her ex George Clooney’s wedding day, the UNICEF Goodwill Ambassador was helping to Give Water, Give Life with her new husband orthopedic surgeon Brian Perri at The Samburu Splash Bash in Santa Monica.

The Samburu Project, a Santa Monica based non-profit that drills freshwater wells in Africa, is working to better the lives of thousands.

Every day 4,500 children die worldwide due to the lack of access to clean, safe drinking water. Through its drilling initiatives, The Samburu Project provides a simple solution to this extraordinary problem.

The Samburu Splash Bash 2014’s goal was to increase awareness for The Samburu Project and raise funds to continue our work in supporting the more than 60,000 people in Samburu we have touched through the drilling of 63 wells.

Jeanette Jenkins, workout guru and The Samburu Project partner was the Mistress of Ceremonies at the event and attendees enjoyed a live musical performance by Warner Bros. Records and Buskin Records Recording Artist Andra Day.

The event included cocktails, culinary creations by local restaurants, fabulous silent and live auctions, and a VIP after party.