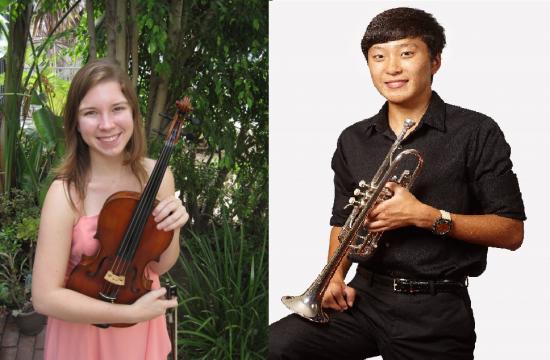 Daggy and Pak will join 150 of the most musically talented and skilled high school orchestral students in the United States for a once-in-a-lifetime experience: performing on the stage of the Grand Ole Opry House in Nashville, Tennessee, on Oct. 29, 2014.

These exceptional students, named the “best of the best” out of approximately 2.5 million students nationwide from local, district and state music festivals, will rehearse a repertoire of remarkably challenging music. They will perform under the baton of one of the most prominent conductors in the United States, Gerard Schwarz, Music Director of Eastern Music Festival and Conductor Laureate of Seattle Symphony.

Daggy and Pak, both seniors at Santa Monica High School, play the principal viola and the principal trumpet, respectively, in the high school’s Symphony Orchestra.

The orchestral program at the school, directed by Joni Swenson and Jason Aiello, consists of seven ensembles, of which the Symphony Orchestra is the top-level full orchestra.

The NAfME All-National Honor Ensembles, consisting of a concert band, symphony orchestra, mixed chorus, and jazz ensemble, are organized by members of the National Association for Music Education (NAfME).

For program and ticket information, visit http://www.nafme.org/programs/all-national-honor-ensembles. Tickets are $25.