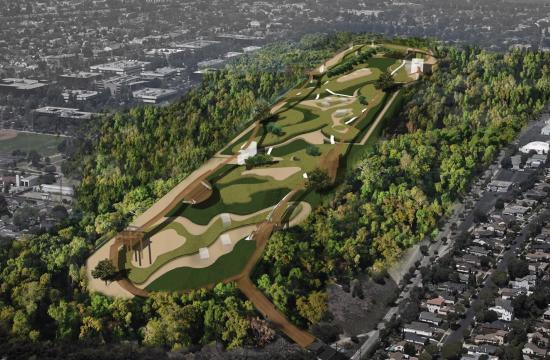 An exhibition titled “Reimagining Santa Monica Airport – Part 1” will be on display for one-night only at a gallery at Bergamot Station in Santa Monica this Thursday, Oct. 23.

A biking bridge with towers along the edge of a heavily forested Santa Monica Airport former runway is one of the conceptual proposals for the future of the airport developed by students at the USC Landscape Architecture program after a three month project.

The images, of how to turn the airport into green space if it’s to be repurposed, will be on display at the Writers Boot Camp Gallery from 6 pm to 9 pm Thursday.

The event is sponsored by Airport2Park.org, a coalition of community groups and neighbors formed to promote the creation of a great park on the land that is currently Santa Monica Airport.

The project was directed by USC Professor and Landscape Architect Aroussiak Gabrielian and the exhibition is curated by Professor Michael Brodsky of Loyola Marymount University, founding member of Airport2Park.

Professor Brodsky said he was thrilled about the exhibition.

“Very few people have actually seen the potential beauty and space that is currently fenced and covered with asphalt on the Santa Monica airport property,” Brodsky said. “This site has such great potential for a park with spectacular views of the Pacific Ocean, Hollywood Hills and the Santa Monica Mountains that are currently only seen by the very few people that use it now.

“I feel that once people see this exhibition of talented graduate landscape architecture students, they will view the Santa Monica Airport site in an entirely new context; as one that can serve many more people in a variety of creative, healthy and sustainable ways than is currently served by the present industrial use.”

The Thursday exhibition will be located located at Bergamot Station #1, 2525 Michigan Avenue, Santa Monica. Car pooling is encouraged and bicycle valet will be provided by Santa Monica Spoke.