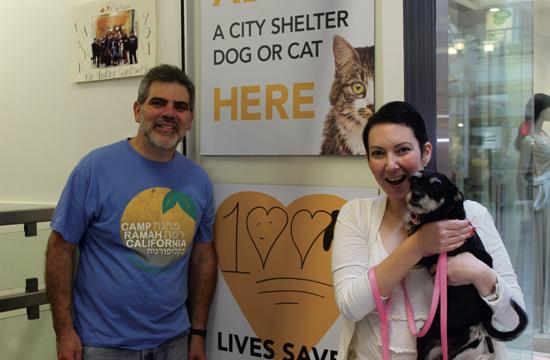 The celebration was held at the Westside Pavilion at the adoption center on the first floor of the mall.

Many adopted animals and their owners attended the event, but the guests of honor were Melissa and Eddie Rabin, and their newly adopted terrier-pug mix, Sadie.

“We thought we would adopt a gentle companion for me,” said Melissa. “And she turned out to be terrific for that. She gets me out for walks and she also is very cuddly and loving in terms of when I’m in pain or when I’m not in pain.”

Suffering from migraines, Rabin read about dogs and decided that adopting one would be the best decision for her. The couple originally came to adopt another dog from a post on the internet, bit did not suit their needs. Then, a staff member introduced them to Sadie, and Rabin “immediately fell in love with her.” She was in the shelter for a month before being adopted.

L.A. Councilman Paul Koretz, who represents Council District 5, attended the celebration to present the adoption center with a certificate of appreciation.

Koretz said he introduced a law banning puppy mills and the sale of commercially bred animals in the city.

“As a council member, I’ve been very involved in trying to get more animals adopted and fewer euthanizations in our shelters,” said Koretz. “This is the model for what we would like to see across the city and across the country. I’ve been a supporter ever since I cut the ribbon for the opening of this place in January of 2012.”

Love and Leashes sees an average of 25-30 adoptions every month.

According to the Rabins, Koretz, and the center’s general manager, Billy Calhoun, the store owes its success to its location.

Mall patrons do not feel as threatened and are more inclined to come in and adopt an animal, they said.

Calhoun compared the experience of adopting an animal from a shelter to visiting a prison.

“We bring the shelter to the mall because a lot of people are really intimidated by going to the shelter,” Calhoun said.

L.A. Love and Leashes is the first and only shop of its kind, according the Calhoun.

The shop is registered as a 501(c)(3) not-for-profit organization, which is a status granted to organizations whose purpose it is to prevent cruelty to animals and children.

“We charge exactly what the shelter charges,” said Calhoun. “One-hundred percent goes directly to the shelter.”

The location is open 11 am to 7 pm on Monday, Wednesday, Thursday, Friday, and Saturday, and 11 am to 6 pm on Sundays. Anyone wanting to adopt an animal from the shelter can call 310.441.1150 or visit laloveandleashes.com.