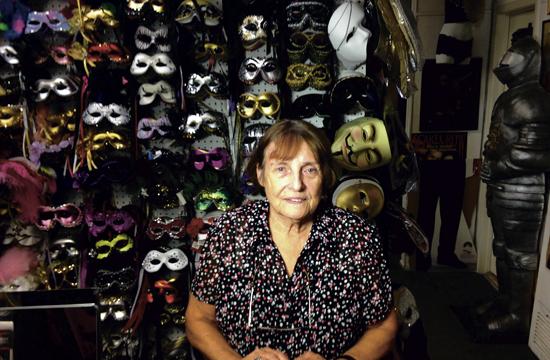 Still pondering over what kind of costume to wear this Halloween? Santa Monica-based Ursula’s Costumes may have the solution: as a year-round costume shop, the store is essentially a treasure chest for those who are seeking the perfect Halloween attire and willing to spend a little time exploring their options.

To say the very least, Ursula’s boasts a wide versatility of Halloween apparel options, with every nook and cranny of the store occupied by masks, accessories, shoes, and of course, costumes. Owner Ursula Boschet elaborated on the array of choices her shop has to offer.

“First-time visitors are always amazed at the variety we have,” Boschet said. “If I had to guess, I would say we have about 5,000 costumes on the shelves right now.”

However, this does not include the minute details that are often overlooked, but contribute as essential parts of a well-coordinated costume. Wigs, hats, mustaches, and all sorts of makeup are all readily available.

“And you haven’t even seen the back stock yet,” Boschet added.

From cute animal suits for toddlers to intense Viking costumes for grown men, Ursula’s seems to have an option for any and every customer that walks through the door.

“We have a little bit of everything,” Boschet said. “You can find what you need, no matter the occasion.”

Although there are of course the traditional Halloween get-ups for sale – like vampires, zombies, witches, devils, and Disney characters – Ursula’s Costumes also makes sure to keep up with the times. Boschet explained that the current costume trends unsurprisingly revolve around pop culture.

“Currently, the more popular costumes are probably the characters from ‘Maleficient’ and ‘Frozen,’” Boschet said. “Costumes relating to the ‘Hunger Games’ and [TV show] ‘Game of Thrones’ are trending, too.”

Relics of popular film past also line the upper shelves of the store, creating a spectacle of Star Wars headgear and authentic Venetian masks that customers can enjoy simply by looking up.

Customers also have the choice of renting their costume from a separate back section of the shop that offers more expensive, elaborate options, from “gorgeous Cleopatras to Madame Pompadours.”

This abundant supply of apparel is partially due to the unique fact that Ursula’s is a year-round, family-run costume shop that does not limit its business to the Halloween season. Borschet explained that there is more demand for costumes than meets the eye.

“There are plenty of other situations where costumes are needed throughout the year,” Borschet said. “Parents often come in for their children’s school plays, and people throw costume parties all the time. Mardi Gras is also pretty big.”

Some of the best-selling costumes during non-Halloween season fall under an unexpected category.

“We get customers who like to go on game shows and wear something that makes them stand out,” Borschet said. “People dress up as bananas, hamburgers, hot dogs, carrots, apples… you name it.”

As for the reason why Ursula’s chooses to remain open year-round, the explanation seems to be Borschet’s passion for the products. She initially started working in the theatre and movie industry as a costume-maker in the 1970s.

“Back then we would make a lot of things ourselves,” Borschet said. “We worked with celebrities, some of which visit Ursula’s Costumes.”

Borschet said that “one thing led to another,” resulting in the eventual development of what is now her very own costume shop. For her, there seems to be magic, beauty, and art to be found in dressing up and utilizing costumes.

“You can completely change and transform yourself with one costume,” Borschet said.