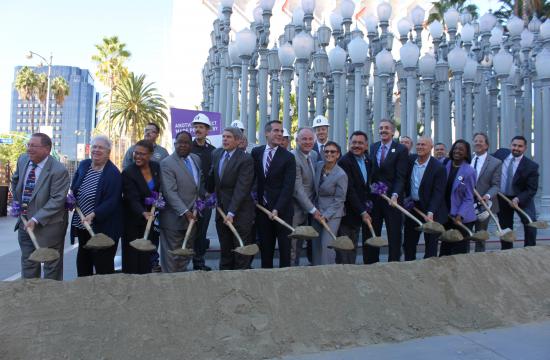 The ceremony, held at the Los Angeles County Museum of Art, comes after Metro’s Board of Directors in July approved a contract with Skanska, Traylor and Shea (STS), a Joint Venture, to construct the transportation project.

The first subway segment will extend the Purple Line 3.9 miles from the existing Wilshire/Western Purple Line terminus near Koreatown into Beverly Hills.

L.A. Mayor and Metro Board of Directors chair Eric Garcetti said the Purple Line will ease traffic along the congested Wilshire corridor.

“When it comes to infrastructure, L.A. is on the move,” Garcetti said. “We are right now investing $36 billion in our transportation infrastructure to ease congestion and create thousands of jobs. All together this is the largest public works project in the nation. In the car capital of the world, we are looking to reduce traffic and cut air pollution by giving people car-free options to get to work and play.”

The Purple Line extension is partially funded by the 2008 Measure R sales tax that was approved by two-thirds of L.A. County voters. The first segment of the subway is expected to be completed in 2023 with a project budget of $2.821 billion. In addition to this local funding, Metro received a $1.25 billion Full Funding Grant Agreement from the Federal Transit Administration to help pay for the first segment.

The U.S. Department of Transportation also granted Metro a low-interest loan of $856 million from a Transportation Infrastructure Finance and Innovation Act (TIFIA) to complete the funding package for the project’s first stage.

Combined, these nearly $2 billion in project commitments represent the biggest federal transportation investment for a single construction segment in the history of Los Angeles County.

Zev Yaroslavsky, L.A. County Supervisor and Metro Board Member, said no transit corridor in the region is in greater need of mass rapid transit.

“The area to be served is one of the most dense employment centers in the country and is plagued by some of the worse traffic congestion in the country,” Yaroslavsky said. “This groundbreaking is long overdue and will be well received by people who work and live in the Westside.”

“I applaud the efforts of everyone who helped us reach this point, but we have work left to do,” Feinstein said. “The federal government is committed to providing $1.25 billion of the $2.8 billion cost for phase one, but future phases will require an estimated $3.5 billion. I will continue to strongly support federal funding to complete this important transit project.”

The project is planned to be built in three sections.

When all three sections are complete, the Purple Line will extend from Wilshire/Western for nearly nine miles with a total of seven new stations.