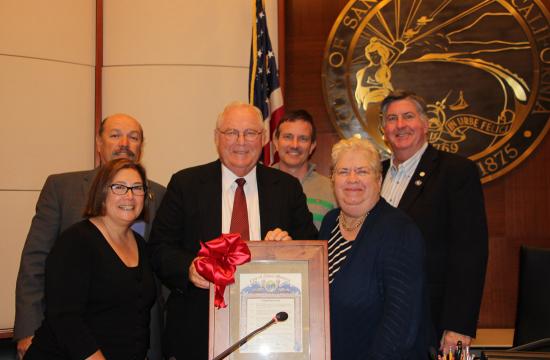 Early on in the evening proceedings, a line of local residents paid tribute to Holbrook’s dedication and service.

“I don’t think that we’ve had anyone on the council who has been a more independent thinker than you sir, and that is commendable – someone that’s all Santa Monica,” said Santa Monica activist Jerry Rubin, adding with a smile that he hopes Holbrook’s suggestion of Santa Monica having its own float in the Rose Parade, comes to fruition.

Council members, past and present, also took turns in praising Holbrook’s contributions to the City, his suggestions, decorum, and strong beliefs.

Mayor Pam O’Connor said his common sense and good humor would be missed.

Acknowledging Holbrook’s wife Jean Ann, the Mayor added that she expects Holbrook’s voice to continue to be heard.

“You are still in Santa Monica, we will see you around, we will hear from you and we just wish you a wonderful, wonderful time,” O’Connor said.

One of Holbrook’s passions is collecting and restoring radios from the 1920s and 1930s. He was presented with a tribute from the City read in succession, a plaque and a beautiful antique radio.

Holbrook took time to reflect on his decision, explaining that at that this time in his life, with four young grandchildren growing fast, he made the choice to spend time with his growing family.

“We’re having the time of our life, visiting with little kids and playing with them,” Holbrook said with a lump in his throat, before composing himself to continue.

“I have been privileged to serve Santa Monica and pleased to be part of city councils who brought so many new and wonderful things to our residents,” Holbrook said. “Just to mention a few things that occurred under ‘our watch’: Virginia Park, Airport Park, Tongva Park, Ken Genser Square, Annenberg Beach House, the total restoration of Palisades Park, which was huge, the main public library.” The list went on.

Fighting back tears and acknowledging the emotional impact of the moment, Holbrook thanked key staff and campaign members before paying tribute to his wife, Jean Ann, and strong supporters and voters of Santa Monica.

“It’s been a grand adventure, I have enjoyed every minute of it, I will miss you,” Holbrook said.