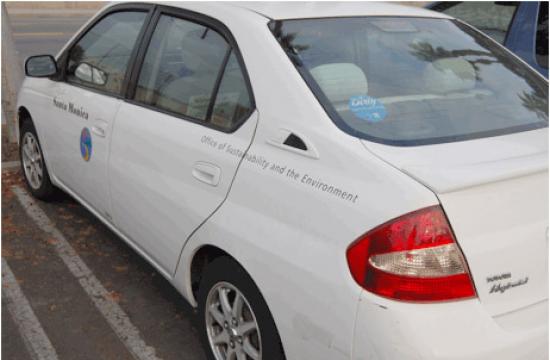 The City of Santa Monica is partnering with Los Angeles Waterkeeper’s “Go Dirty for the Drought” campaign to raise awareness and conserve water during California’s worst drought in history.

More than 300 city vehicles, including the Big Blue Bus, which serves over 52,000 customers per day, are participating in the ‘Dirty Car’ Pledge that began Wednesday.

Just six weeks into the campaign, Los Angeles Waterkeeper has received almost 6,000 “Dirty Car” pledges from residents throughout the state of California, saving more than 1 million gallons of water *.

Los Angeles Waterkeeper sends participants who take the pledge a static-cling sticker to display on the window of their car, which helps spread the word about the drought while driving throughout the city and sharing it on social media (#DirtyCarPledge).

Now, local governments like the City of Santa Monica are starting to jump on board and do their part, too.

“Santa Monica is proud to partner with Los Angeles Waterkeeper on this campaign,” said Terry O’Day, Mayor Pro Tem of the City of Santa Monica. “We are committed to conserving water in this severe drought and to reducing our consumption in the long-run, and encourage residents throughout the region to ‘Go Dirty for the Drought’ too!”

The City of Santa Monica vehicles that are participating in the pledge are normally washed two to four times per month, and will save nearly 40,000 gallons of water over the next 60 days.

The Big Blue Bus’s fleet of almost 200, 100 percent natural gas vehicles has pledged to cut their exterior washing schedule in half, which will save over 30,000 gallons of water in 60 days, and will also reduce a significant amount of energy use.

“Local and state agencies should be at the forefront of making more water-conscious decisions and educating the public about the drought,” said Liz Crosson, Executive Director of Los Angeles Waterkeeper. “The City of Santa Monica is a leader in sustainability, and we hope that their participation in the campaign will empower residents and other cities throughout California to do their part to conserve water, too.”

Other local governments in LA County have joined the effort as a result of the City of Santa Monica’s decision to participate. The City of Burbank has pledged to not wash over 350 vehicles for 60 days.

Los Angeles Waterkeeper’s goal is to reach 10,000 pledges, which would save about 3 million gallons of water*.

To take the Dirty Car Pledge and view photos and statistics from the campaign, visit www.dirtycarpledge.com.

Donations to Los Angeles Waterkeeper in support of their campaign to raise awareness about the drought can be made online at www.LAWaterkeeper.org/donate.