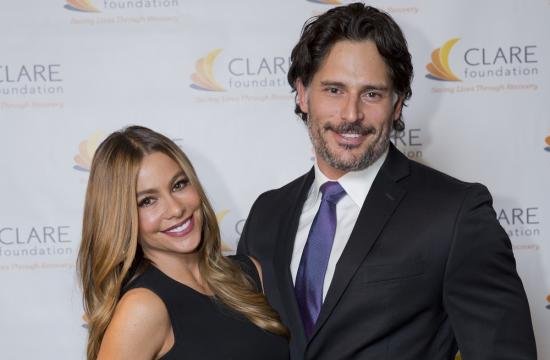 Pat O’Brien, well-known sportscaster and Access Hollywood host, emceed the event which included a formal dinner, awards presentation, and speeches by the honorees whom were recognized for their support of the growth and evolution of the 44-year old Santa Monica-based CLARE Foundation. Overall, the event grossed over $500,000.

Honoree Joe Manganiello received the Friends of CLARE Tribute Award in recognition of his lasting contributions to the field of recovery.

Manganiello, an actor, director, producer, and author, fresh off filming the Magic Mike sequel has played Flash Thompson in the original Spider Man film series and had various recurring roles in television on ER, How I Met Your Mother, and One Tree Hill, before landing his breakout role as werewolf Alcide Herveaux on the HBO television series True Blood.

“They teach people how to live past their stay there,” said Manganiello about his experience at CLARE. “I know firsthand how frustrating it is for the friends and family of addicts and alcoholics to want to help their loved ones but not know how. Well, they can sleep easily at night knowing that their donations to Clare are making a world of difference saving lives.”

CLARE Ambassador Steven Glick received the Spirit of CLARE Award for his long-time service as a CLARE board member who galvanized the organization to strengthen and broaden its capacity as a Santa Monica and greater Los Angeles community partner.

And finally, CLARE bestowed it’s first-ever Client of the Year Award upon client alumnus Craig Borten for his inspirational support to CLARE and its clients. Borten’s personal reclamation mirrors that of his Oscar-winning film Dallas Buyers Club, which languished in Hollywood “development hell” for nearly a decade.

“It’s an honor and a privilege to present the Client of the Year Award to Craig. Anyone who knows his story knows that it’s one of inspiration,” said CLARE Foundation Executive Director Nicholas Vrataric. “We couldn’t be prouder of his success—both professionally and personally—and we’re so thrilled he’s remained so close to us here at CLARE.”

During his acceptance speech, Borten explained his appreciation for going through CLARE. “It was the best thing that ever happened in my life. I have an incredible life beyond my wildest dreams.”

“Joe, Steve, and Craig are so dear, generous and inspirational to everyone at CLARE — both staff and clients,” said Vrataric. “And they share our excitement to be part of this organization that’s morphing and growing along with the community, and truly a partner in the community health of Los Angeles.”