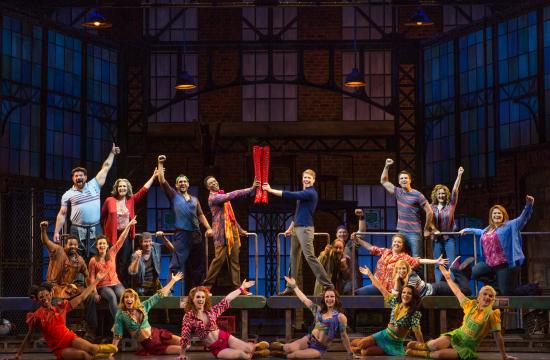 The magic of touring Broadway shows continues at the Pantages Theatre in Hollywood with the arrival of “Kinky Boots” through Nov. 30 after it opened on Tuesday as part of its first national tour.

Fans of Cyndi Lauper are in for a treat with music and lyrics by the rock icon; “Kinky Boots” is Lauper’s first effort at writing for the stage with the help of award-winning orchestrator Stephen Oremus.

Inspired by a true story, it doesn’t take long to be stirred by Broadway’s huge hearted hit with its fast-paced singing, dancing, and eye-popping costumes and bright sets.

The story centers on Charlie Price (perfectly brought to life by Steven Booth) who has reluctantly inherited his father’s failing shoe factory Price & Son after his dad suddenly died.

With the business on the brink of bankruptcy, he tries to live up to his father’s expectations and save his legacy (Charlie is a fourth-generation “son” in the family business), but he is torn between wanting to save the workers’ jobs and wanting to close the factory, which he sees as a much easier option.

When it seems all hope is lost, an unlikely source of inspiration unexpectedly enters his life after a street altercation: a drag queen by the name of Lola, played fabulously by Kyle Taylor Parker.

Lola, who explains there are more drag queens than one would suspect yearning for sturdier high-heeled footwear, turns out to be the one person who can help Charlie become the man he’s meant to be.

With the help of Lola (after some reluctance), Charlie sets out to produce custom footwear, Kinky Boots, for drag queens and kings.

As they work to turn the factory around, this unlikely pair finds that they have more in common than they ever dreamed possible. It doesn’t take long for them to discover that when they change their mind about someone, they can change their whole world.

While their journey to success is bumpy and almost falls apart completely at times, their story of friendship is moving, showing that sometimes you just have to take a chance, seize your destiny, and be who you want to be without mattering what others think – a good life message for anyone watching the show.

The production has already seen great success since opening on Broadway in 2013 (it took home six Tony Awards that year, the most of any show in the season, including Best Musical, Best Score, Best Choreography, Best Orchestrations, and Best Sound Design).

The pair has done an astounding job considering the film was not a musical – it featured just a few cabaret numbers.

Jerry Mitchell directs and choreographs this musical and does so brilliantly, with every moment on stage fully realized. His success can be measured in many ways, but it is interesting to note that when the production opened on Broadway April 4, 2013 it quickly broke all box office records at the Al Hirschfeld Theatre, recouping its costs in October of that year, after just 30 weeks on Broadway.

When it comes to the lead actors, Parker does a wonderful job as Lola strutting his stuff and climbing into his character’s skin. A wonderful behind the scenes look can be seen online with Parker filming regular YouTube video diaries of what it takes to rehearse and perform a Tony Award-winning musical across the nation (check them out at kinkynation.net).

Meanwhile, Booth’s performance is moving with what may be described as an emotional wallop. His presence on stage is natural and authentic when it comes to his character’s evolution and embracing the importance of relationships.

The feel good show does take the audience on an emotional rollercoaster. There are a few sad, serious songs like “Not My Father’s Son”, but there are definitely more upbeat and energetic acts such as “Everybody Say Yeah” and “Raise You Up” that brings the Pantages alive.

The performance schedule for “Kinky Boots” is Tuesday through Friday at 8 pm, Saturday at 2 pm and 8 pm, and Sunday at 1 pm and 6:30 pm.

The schedule exceptions are Monday, Nov. 24 at 8 pm and Friday, Nov. 28 at 2 pm. There are no performances on Thursday, Nov. 27 and there is no evening performance on Sunday, Nov. 30.

Hollywood Pantages is located at 6233 Hollywood Blvd., Hollywood. Its box office opens daily at 10 am. The show is recommended for ages eight and up. In consideration of audiences, no one under the age of five will be admitted to the theatre.

For tickets or more information, call 800.982.2787 or visit www.HollywoodPantages.com or www.KinkyBootsTheMusical.com.