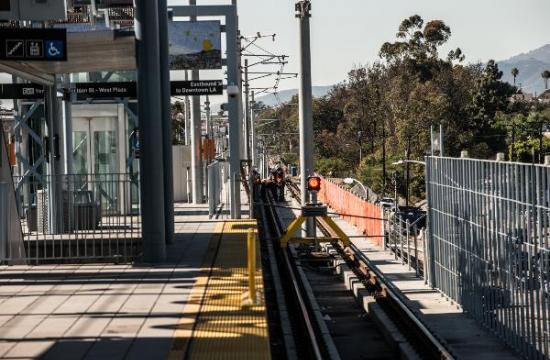 After more than two years of construction, Expo Phase 2 reached a significant milestone this past weekend as crews began tying together the electrical components of Phase 2 of the Expo Line with Phase 1 at the Culver City station.

Work started early Saturday morning after service on Phase 1 ended for the evening.

Crews worked throughout the weekend to pull the wire and fiber optic cable from Phase 2 into Phase 1 and route it into the Communications and Systems building at Culver City Station.

The existing dead-end Overhead Catenary System poles and bumper posts were removed so that rail equipment can travel onto the Venice Boulevard Bridge and along the rest of the Phase 2 alignment when it opens.

Work on the tie-in will be completed next weekend (Nov. 15-16) after service ends early Saturday morning. Traffic on Venice Boulevard and surrounding streets will be unaffected during that work activity.

Rick Thorpe, CEO of the Exposition Construction Authority noted, “We’re pleased to bring these two lines together and take the next step towards finishing Expo Phase 2 and connecting downtown to Santa Monica. We remain focused on completing construction in 2015.”

Service on Phase 1 of the Expo Line began in Spring 2012. Construction on Phase 2 is approximately 80 percent complete and is expected to be finished in 2015.

The Expo Line will bring greater mobility to the region by connecting West Los Angeles to the region’s existing rail network. These communities are traditionally underserved by public transportation and among the most traffic-congested in the nation.

For additional information regarding construction activities, contact Expo at 213.243.5500 or visit www.buildexpo.org.