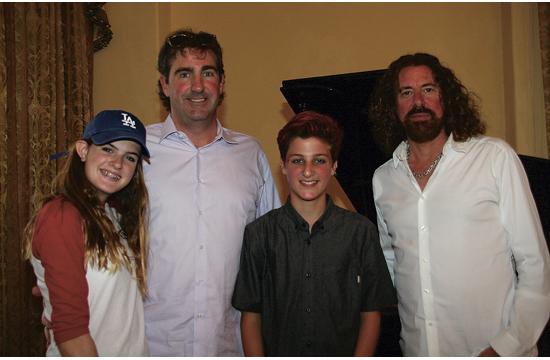 As a characteristically fun-loving and energy-filled organization, the Santa Monica Rotary Club members attended their Oct. 31 meeting in costume to honor the Halloween spirit.

The dining hall was decked out with black tablecloths and orange napkins alongside plenty of themed knick-knacks like Halloween candy and plastic bugs.

With guests warmly greeted by Jillian Alexander and Ethan Brown as well as an invocation led by Nat Trives, the meeting commenced with song leader Carol Jackson as she led the Rotarians in singing “Great Pumpkin is Coming to Town,” a festive melody inspired by the tune of the classic Christmas carol.

As a part of a special announcement, Rosemary Regalbuto further proved that the Santa Monica Rotarians know how to effectively balance bringing fun to the club while maintaining a serious outlook about its mission at the same time.

After she introduced the concept and the function of the Paul Harris Fellow, she helped to honor the Santa Monica Rotarians who received the award this time around.

“We do have a lot of fun,” Regalbuto said. “We also build life long relationships and honor our commitments. We apply our leadership and expertise to address social issues. The two most common reasons people join Rotary is for friendship and to make a difference in their communities.”

She explained that Rotary International is “principally supported by volunteer groups that support its mission to provide service to others” and that the Rotary Foundation is the “charitable arm” of the organization, funded solely by volunteer contributions from members and friends of Rotary.

“As the charitable arm, they tap into the global network of Rotarians who invest their time, money, and expertise into our priorities, such as eradicating polio and promoting peace,” Regalbuto said. “The foundation grants empower Rotarians to approach challenges, such as poverty, literacy, and malnutrition, and leave a lasting impact.”

“The presentation of the Paul Harris Fellow recognitions is the Rotary Foundation’s way of expressing appreciation for substantial contribution to the program,” Regalbuto said. “The world of peace and goodwill becomes closer today as our honorees become multiple and first-time Paul Harris fellows. Their gift of $1,000 to the Rotary Foundation’s educational and humanitarian programs is a commitment to peace and better way of life for all.”

Santa Monica Rotarians Judy Neveau, Billy Howard, Adam Lichtl, and Vlado Valkof were called up to the podium and were given their certificates and pins.

“In becoming a Paul Harris fellow, one joins a remarkable company of persons throughout the world,” Regalbuto said.

Paul Harris was Rotary’s founder, a Chicago lawyer who started the organization in 1905. The Paul Harris program was established in 1967 to show appreciation and to encourage substantial contributions.

After honoring the four Santa Monica Rotarians, the meeting continued with the introduction of the guest speaker by Roger Davis. It was a particularly special, family-oriented presentation, as speaker Sean Campbell is the music teacher of Davis’ children, Grace and Clayton.

“Sean coaches and trains my children musically,” Davis said. “They’ve come a long way since they started taking classes with him.”

Campbell began to speak about his journey as a music teacher, but not before addressing the relevance of Rotary in his own life.

“Ever since I was a little kid I’ve heard the words ‘Rotary Club’ but had no idea what they meant,” Campbell said. “It’s nice to have the opportunity to immerse myself in the community and culture and see that the Rotarians stand for things that are certainly uplifting in society.”

Campbell explained that although he was reluctant to start playing instruments as a child due to the level of technicality and skill they called for, he found himself on an “interesting path” that led him to spontaneously buy a guitar as a college student and later be married to his current wife, who owned a school called the Music Castle.

Campbell and his wife Paulette serve as owners and instructors at the Music Castle, which has locations in Beverly Hills and Santa Monica. Though he never had any intention to teach, Campbell has discovered his knack for educating and leading his pupils.

“I did the best I could,” Campbell said. “People come here never having touched an instrument, and in a few weeks, I feel like I can get anyone to play the guitar and piano.”

For more information on the Music Castle, visit themusiccastle.com.