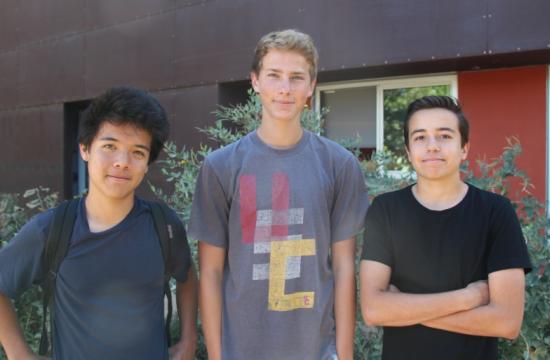 New Roads School students and amateur entomologists Will Pulier, Craig Barrett, and Justin An made an important discovery on their Santa Monica campus in early October.

The 10th grade students found a large bee crawling around on campus, collected it in a cup and brought it to their biology teacher, Eric Cleveland.

Together, they identified the insect as a Carpenter Bee of the genus Xylocopa – nothing unusual there.

Upon closer examination to determine the gender of the bee, the teacher and students discovered that they had found a very rare form of the insect, a mosiac gynandromorphy.

Cleveland said during the development of the insect egg, there is a mistake separation of male chromosomes from female.

“Consequently, the left side of the bee has the yellow look of the male while the right side is black, a characteristic of the female of the species,” Cleveland said.

Dr. Brian Brown, Head Curator of the Entomology Collection, was extremely interested in the find and collected the rare bee to verify it is indeed a mosaic gynandromorphy.

Acclaimed actress Isabella Rossellini even discussed the New Roads Bee in a recent presentation at the Natural History Museum about gender oddities in the natural world.

Will says, “Making a scientific discovery is much more exciting than just reading about biology in a book. Experiencing something firsthand and feeling like I found something unique makes me want to learn more.”