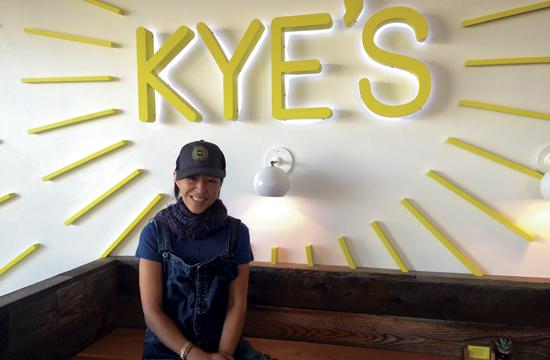 New superfood fast casual restaurant Kye’s celebrated its grand opening on Montana Avenue in Santa Monica on Wednesday with its eclectic and flavorful culinary combination of Western and Eastern flavors.

The eatery has a heavy emphasis on health and nutrition, providing guests a range of wholesome choices on the mostly gluten- and dairy-free menu, including vegan, macrobiotic, Paleo, and raw options.

The mainstay of the menu is the one-of-a-kind KyeRito, a wrap/roll that boasts an assortment of locally-sourced foods fused together to create a mix of distinctive ingredients.

At Kye’s, familiar components of a healthy meal, like farm fresh vegetables and wild salmon, are incorporated with herbs, spices, and sauces to provide a sense of uniqueness.

The KyeRito takes advantage of a “slip wrap” technique that allows each nutrient-rich part of the meal to remain fresh and crisp.

Owner Jeanne Cheng described the birth of the KyeRito concept, citing her desire to responsibly feed her kindergarten-aged son Kye as a major influence.

“I just thought the KyeRito would be a great food,” Cheng said. “Once my son started school, I felt like I had time to start playing with it, applying for the patent for the way it’s wrapped, and developing the different flavors.”

Cheng’s creativity in the kitchen can be traced back to her childhood.

“Since I was little, I’ve always combined East and West,” Cheng said. “I’d make peanut butter and jelly bao on a steamed bun. We’re using a lot of Asian technology to make Western and global foods and also make them more allergy-friendly and interesting by adding unique flavors.”

By simply skimming through the KyeRito descriptions on the menu, customers can note that a myriad of different components are combined into each wrap/roll. Categorized into four distinct flavor groups – breakfast, deli style, classic comfort, and Asian inspired – the KyeRito choices will likely be able to accommodate to any mood or time of day.

“I love pretty much anything on the menu,” Cheng said. “I can’t choose a favorite. They’re all so different.”

Cheng conceptualized all of the menu items, and with the help of a few renowned chefs, the fare was successfully developed and executed. She explained why Kye’s menu items are standouts among other restaurants.

“The KyeRito is super convenient because it’s so portable,” Cheng said. “At the same time, the food is very flavorful, very healthy, and very nutrient-dense.”

The 13 KyeRitos currently offered on the menu range from $8 to $14, with children’s options available as well. These wraps are complemented by shakes, smoothies, and house-made beverages that integrate super foods, too: the breakfast smoothie includes two types of kale and protein powder, while the chocolate shake incorporates spinach and Chinese yam. Also available are coffees, teas, and tonification herbal water.

The menu doesn’t leave out desserts, either. Although the fresh mint and chocolate shakes may be enough to satiate the sweet tooth, Kye’s also offers black bean brownies as treats.

Cheng further explained why Kye’s chooses to spotlight healthy and nutritious ingredients. She has previously stated the significance of satisfying both “the yin (nourishment) and the yang (enjoyment)” of what is eaten.

“One way to make the world a better place is to give people everything their bodies need to function optimally,” Cheng said. “We hope to just bring a lot of light and joy and ease into everybody’s daily lives.”

As a part of its commitment to community well-being, Kye’s offered its first 50 guests a complimentary KyeRito on its opening day and donated a portion of the proceeds to the Heart of Los Angeles, a local non-profit community center.