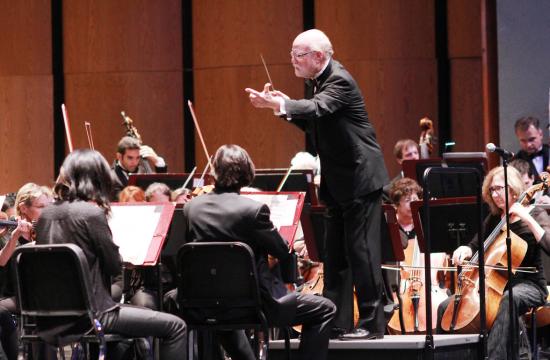 At its season opening concert on Oct. 26, Orchestra Santa Monica dedicated its performance of Beethoven’s “Eroica” Symphony to John Bohn, a leading OSM supporter and the sponsor of the concert.

An impassioned performance of the symphony ended with a standing ovation by the audience, markedly honoring and celebrating his life. John Bohn, one of Santa Monica’s most distinguished citizens, passed away on Oct. 11.

At the time of the sponsorship Bohn explained to OSM that supporting classical music was a family tradition and added, “I believe that Orchestra Santa Monica is a marvelous orchestra that contributes to the vibrancy of our wonderful community. I am excited to sponsor this concert and help share their music with a wider audience.”

“I think it was very fitting to dedicate the performance of the “Eroica” Symphony to John,” said OSM Music Director Allen Robert Gross.  “Everyone who knows this piece immediately thinks of the funeral march for such an occasion as this, but in fact the entire piece is celebratory in the deepest sense.  And ultimately we wanted to celebrate the life of this unique individual who brought so much to his community.”

In addition to Bohn’s sponsorship, Orchestra Santa Monica has received two grants from the City of Santa Monica to support its programs this year as well as grants from the Leo Buscaglia Foundation and the Santa Monica Rotary Club. Important corporate support for the orchestra also comes from Agensys, Inc., RAND, Pacific West Bank and the office of LA County Supervisor Zev Yaroslavsky.

OSM’s next concert “Happy Birthday Amadeus” is on Jan. 18, 2015 at the Moss Theater located on the campus of the New Roads School in Santa Monica.

Complete information about the season’s programs can be found at www.OrchestraSantaMonica.org.