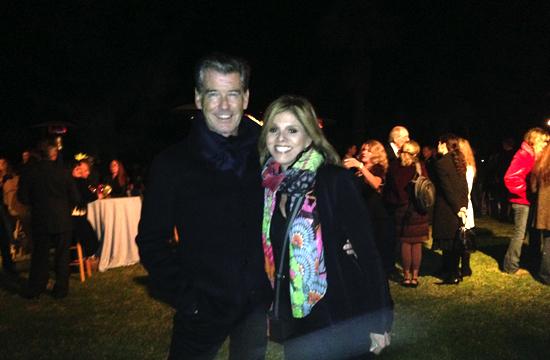 The sounds of barking dogs and meowing cats were notably absent during a recent Saturday afternoon and evening when a crowd of passionate animal lovers gathered at the Gull Estate (formerly Dick Clark’s home) at the beach in Malibu.

Instead, the music group INXS performed live from a stage set up on a grassy stretch of land just above the pounding Malibu waves.

The band played on for a benefit supporting Social Compassion in Legislation (SCIL), an organization that speaks up loudly for animal rights through its Sacramento lobbyists who work to create and pass legislation aimed at making the state more compassionate in its treatment of pets and other four-legged creatures.

Actor Pierce Brosnan and his wife Keely, along with Jane Velez-Mitchell, hosted the fundraiser.

“SCIL has focused on the toughest aspect of the animal movement, getting laws passed. The organization has a great track record of getting lawmakers to listen and follow their conscience, no small achievement,” said Velez-Mitchell, the journalist who is the editor of JaneUnChained.com and a former Headline News Network anchorwoman. “California is the early adopter for the nation. So, by focusing on passing laws in California, SCIL supercharges advances for animals around the nation and the world.”

Judie Mancuso, SCIL’s founder and director, said the goal of the evening was to raise enough money to fund lobbying efforts for the 20015 Californian legislative session, to increase the organizations scope and extend its reach. Founded in 2007 in the aftermath of Hurricane Katrina when countless dogs and cats were abandoned as floodwaters ravaged New Orleans, SCIL is a nonprofit working on solutions to pet overpopulation through state and local policy changes and implementation, community outreach and public and private programs.

“We raised money, made new friends and strengthened the bonds with old friends who have helped make us strong,” Mancuso said of the evening.

Hundreds of thousands of dogs and cats are euthanized in California every year at the cost of millions of dollars to taxpayers. Spaying and neutering greatly reduces both the needless suffering of the animals, and the public expense and SCIL is dedicated to expansion of such low cost services to reduce and eventuality eliminate the need to euthanize.

For more information, or to donate, visit socialcompassioninlegistaltion.org.