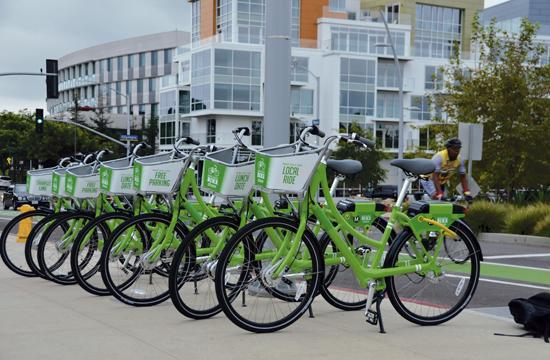 With a move to increasing commuter mobility, Santa Monica will be the first SoCal city to introduce an innovative bike-share system with high-tech smart-bikes stationed somewhere near you, at all times.

“We are super excited about the program,” said Josh Squire, CycleHop CEO. “With Santa Monica leading the way in bike share in the region and adding high-tech smart bikes, it’s a large implementation and using social bicycles there are more features for the user and it’s more scalable.”

State-of-the-art smart-bikes will be provided by Social Bicycles and are equipped with integrated locking systems, mobile connectivity, GPS-tracking, and a host of clever features.

“Our bikes are durable, reliable, and come with security tracking, integrated lighting, and adjustability features,” explained Ryan Rzepecki, Social Bicycles CEO. “For Santa Monica we are going with an 8-speed drive shaft bicycle, that means there are no chains, less complications, and enough range to navigate the local terrain.”

Complete with mobile app connectivity and GPS tracking, bike-share users will be able to see where bikes are available and book them using their cell-phones and compatible devices.

The locking system on the smart-bikes enables them to be secured to regular bike-racks and the GPS security system will identify any wrongdoing. The City has also been directed to develop a program so that non-bike-share bikes will be prohibited from bike-share hubs.

“It’s great to kick up the kick-stand and get bike-share rolling in Santa Monica,” said Santa Monica Mayor Pam O’Connor. “Besides being a healthy activity, it provides another mobility option. During a day about town one can walk a segment, bike a segment, take transit – in any order and get around Santa Monica.”

The City’s bike-share program will connect with the Expo line and is expected to grow throughout the county linking Metro’s expanding rail network with bike-share, car-share and buses, the Mayor added.

Operators are now faced with the task, in cooperation with the City, of maximizing such personal-mobility systems.

“We look at where we can connect transit options,” Squire explained, “the “last mile” gap between transit stops and workplaces or shopping areas. We will also consider space, parks, beaches, how to maximize the unique area of Santa Monica and how to create a balance between residents and tourists.”

The bike-share program does come at a cost however, with City council approving the initial contract to CycleHop worth $5,615,567 for the purchase, installation, and operation of a 500-bicycle bike sharing system.

Citing examples from other cities across the country, a corporate sponsorship program for the bikes was approved by City council, directing the City Manager to, “Pursue corporate sponsorship funding, either directly or through an agency, to provide a minimum of $250,000 per year and return to Council for approval of a specific sponsor or sponsors prior to system launch. Corporate messaging for the sponsor would be displayed on bike-share bicycles, on-line, in hard copy bike-share materials and recognition during the system launch.”

Operators are calling on community input on where to place bike-share hub stations. Resident’s requests will weigh highly on final placement decisions according to Rzepecki and can be registered at smbikeshare.com.

Usually bike-share systems are up and running within 6-12 months of being approved, he added. The goal for the Santa Monica system is to launch just prior to the opening of the Expo line in 2015.