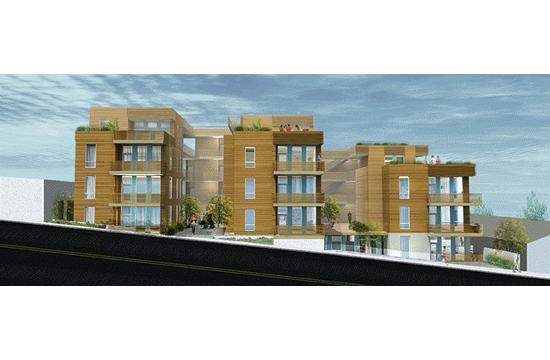 Two and a half years in the making, the town-house styled development got the all-clear from council members with the ordinance and subsequent development design passing unanimously with amendments to water-metering and a quick Architects Review Board look at planting in the courtyards and Pico entrance.

“We have not been building a lot of housing,” Councilwoman Gleam Davis, who moved the ordinance with amendments, said during council. “Whether we like it or not, the regional population is going to grow and that region population needs housing.”

The project site is located on the south side of Pico Blvd. between 11th Street and Euclid Street in the R4 district.

Currently, the project site is a vacant lot. It previously contained 15 rent-controlled residential dwellings, which were removed from the rental market pursuant to the Ellis Act and demolished in 2008.

Adjacent uses along Pico Blvd. include a motel and residential development.

During Tuesday night’s council meeting, resident and tenants groups urged City Council to move forward with the development, many stating that they were sick of seeing an empty lot degrading their street.

“We’re kind of getting tired at looking at the piles of dirt,” said local resident Tom Byron, whose house backs onto the empty lot. “We’re hoping that this will boost up the neighborhood and that something will eventually be done about the dump of the hotel just to the right of this building, which is a constant source of police calls.”

The approved development has a teak exterior and many sustainable features enabling it to achieve LEED Platinum certification, including large courtyards to allow for natural light into the units, cross-ventilated units, photovoltaic panels located on the roof to generate energy to meet Land Use and Circulation Element (LUCE) development parameters and a tier system which allows graduated height and floor area ratio (FAR) standards, according to the City.

There will also be at least two electric vehicle-charging stations in the car park, with two spaces reserved for each unit. Tenants will be unable to apply for preferential parking permits, addressing several concerns from members of the public about street congestion.

High on City Council’s discussion agenda Tuesday night was the issue of water use and metering.

City staff presented a development agreement amendment that states that each individual unit in the project will have its own water meter to monitor water use and to enable individual unit tenants to be charged according to their water use. Council included the amendment in the passing of the ordinance.

After much discussion, everyone agreed that this would satisfy all concerns.

Councilman Ted Winterer raised the issue of landscaping and urged the Architect Review Board pay attention to discrepancies between City Staff and the Planning Commission regarding planting trees versus planter boxes and landscaping at the Pico entrance. His suggestion was added as a “friendly” addition to the ordinance.

“While this does provide some stability and keeps the owner from raising rents 10 percent when CPI is two percent, since they’re already starting out at market rate…I’m just concerned that in the future we not use this as a trade off for something that is truly affordable housing,” Councilwoman Davis said, adding that a priced controlled unit renting at above $3,000 a month should in no way be considered “affordable.”