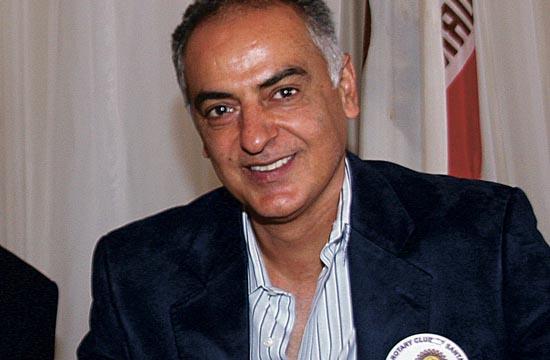 The Santa Monica Rotary Club meeting was adorned with UCLA and USC school colors on Friday, Nov. 21 in advance of Saturday’s college football game at the Rose Bowl between the two rival schools.

From blue, red, and gold balloons to tailgate-themed bites like burgers and chips, Santa Monica Rotarians took the chance to fully immerse themselves in the local spirit of the well-known university rivalry.

With several UCLA and USC alumni present among the Rotarians, the meeting was held in the spirit of friendly competition.

Members were greeted by Drew Fleming and Avo Guerboian along with an invocation by Jay Smith, the meeting commenced as the Rotarians took their seats and munched on their out-of-the-ordinary “finger foods.”

Rosemary Regalbuto inducted new member Kami Pahlavan to the Santa Monica Rotary Club, dedicating a portion of the meeting to the new addition to the Rotarian family.

The meeting continued with the introduction of the guest speaker, former UCLA alumnus and volleyball player Michael O’Hara, who gave very fitting anecdotes and life experiences considering the sports-centric theme of the afternoon.

Len Lanzi, who introduced O’Hara, explained how “Mike took up volleyball at UCLA,” describing the discovery of the sport as finding a “magic waterfall” after “being in a desert all [his] life.”

Clearly, O’Hara left just as much of an impression on volleyball as the sport did on him, as he was instrumental in making volleyball a lasting varsity sport at UCLA. O’Hara then went on to play in two national championships at UCLA and eventually compete on the first American volleyball team at the 1964 Tokyo Olympics.

“Volleyball changed my life,” O’Hara said. “I fell in love with the Olympic concept. I became an expert in helping committees get ready for the games.”

Although O’Hara did not dip his toes in the world of athleticism until his college years, the love affair with volleyball and the Olympian concept led him to prestigious positions, including being able to serve as a key organizer in some Olympic games, namely the 1984 Olympics held in Los Angeles. O’Hara was also responsible for launching the world volleyball league.

With years of experience in the realm of volleyball, O’Hara recalled some humorous, memorable events from his time as an event planner.

“The scariest thing that happened to me was probably when I was invited to the Olympic committee in the U.S. to help be a part of their carrying of the torch,” O’Hara said with a laugh. “I was supposed to carry the torch from Downtown L.A. to the Santa Monica Pier, and I was to stay for about 40 minutes with about 10,000 people there, including media.”

Plans immediately changed, however, and O’Hara was reassigned location and time: he was to begin at the Los Angeles airport at midnight instead. Though the proceeding series of events involved almost getting involved in a tussle with some troublemakers who attempted to abduct the torch, O’Hara survived the situation thanks to a nearby guard.

“Had they been successful in making that kidnapping of the torch that [news] would’ve gone instantly around the world,” O’Hara mused. “Around the world, the Olympics are thought of with a lot of dignity, so something like that would’ve made front page news nothing but Olympic events were being reported [during that time]. That would have been the worst possible information that we would want to have released.”

Despite the high-stress situations that O’Hara was placed in throughout his career, he reassured his listeners that he enjoyed every moment of his time with the Olympic games.

“I was delighted to have the honor,” O’Hara said. “That’s what the Olympics are all about: you adjust.”

The presentation was followed by a Q&A session, during which the Rotarians not only asked O’Hara a few questions, but also showed their respect as they complimented and honored his commendable athletic and professional career.