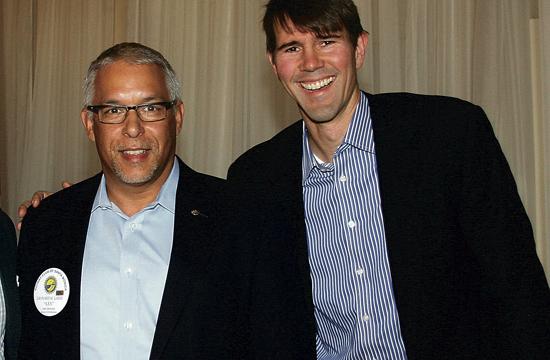 The Nov. 7 Santa Monica Rotary Club meeting spotlighted the significance of the Veterans Day holiday throughout the luncheon, from a relevant invocation to the recognition of veteran Rotarians to the guest speaker.

Rotarians were warmly greeted by Linda Teixeira and Judy Neveau as they entered the Riviera Country Club into a period of reflection and appreciation of those who served for the country.

Led by song leaders Pat Bofird, Tom Larmore, and Ken Waltzer, the meeting was also livened up by incorporating the official songs of the Army, Navy, Marine Corps, Air Force, and the Coast Guard into their usual musical introduction.

At the same time, veterans were encouraged to make their way to the front of the room during this time in order to highlight their presence and the members’ appreciative sentiments.

As for the guest speaker of the afternoon, Rotarian Len Lanzi took to introducing former lieutenant commander Todd Hickman, who further accentuated the great need to support returning U.S. veterans.

“[Hickman’s] motto is ‘the veterans served; let’s serve them,’” Lanzi explained. “The organization allows aspiring entrepreneurs to come, create, and conquer the business world through their ideas, hard work and strategy.”

“How did the Bunker come about?” Hickman asked rhetorically. “It’s very simple: it’s the idea of how we can look for opportunities for veterans coming back from any war or any time… independent of when they graduate from the military.”

Hickman emphasized the necessity of a good close-knit community in the lives of veterans.

“The mission is to create a national network and capitalize on that network and that camaraderie,” Hickman said. “We want to create long-term mentorship to help them grow.”

Hickman concluded his portion of the speech by touching on why he personally works with the Bunker and what he hopes to ultimately achieve.

“Essentially this is my giveback; it’s the legacy I’ll leave in this country,” Hickman said. “The veteran entrepreneur rate is declining because there’s no effective infrastructure. They deserve one and it’s the right thing to do. I want to redefine the way people look at veterans.”

Jim Murphy, a colleague of Hickman, took to the microphone to explain his own related endeavors. As a representative of the Invicta Challenge, Murphy explained that the company seeks to educate the male youth and teach them about commendable character traits and life values through a line of various products, including books, games, and toys. All of these products aim to tell leadership stories that will inspire and motivate boys.

“This company is essentially American Girl, but for boys,” Murphy explained. “There is a tremendous need in the marketplace right now for products for boys that tell really empowering stories, things that they can wrap their heads around, get excited about. They need something that can provide a vision for what they’re going to be like when they’re older.”

The lack of such products is known as the “boys’ crisis,” and according to Murphy, the White House has even taken to developing an initiative to discuss the matter.

“[The White House has organized a challenge] called ‘My Brother’s Keeper,’” Murphy said. “It’s clear that there is a true need for this kind of content.”

The Invicta Challenge’s ultimate mission is to shape boys in to physical, mental, and moral leaders.

As usual, the Santa Monica Rotarians presented the two men with a series of questions – including how they can donate and how they measure success – revealing their sincere interest and intent listening throughout the presentation.