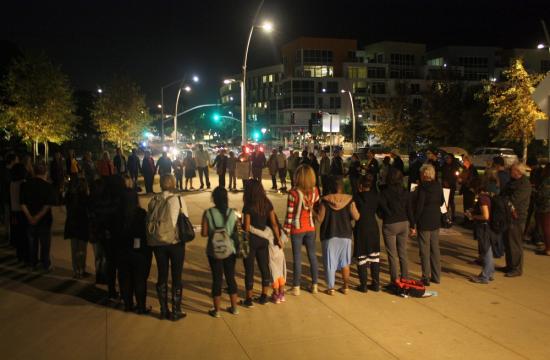 It was held following a grand jury decision’s Monday in Ferguson, Missouri not to indict a white Missouri police officer who killed a young, unarmed black man.

Rev. Janet G McKeithen, Minister at Church in Ocean Park and president of the Westside Interfaith Coalition, was one of the organizers of Tuesday’s vigil that stated at 5 pm near Santa Monica City Hall.

“All people are created equal, all people have an inherent sacredness, all people are worthy of love and respect, all people are connected … what affects one, affects all,” McKeithen said. “If we believe in establishing a beloved community, we will listen to people who live while black. And those of us in the dominant culture will stop acting like we know when we don’t. There is a systemic problem of racism in our nation. We need to work together to ensure that all people live in freedom, no matter what a grand jury says.”