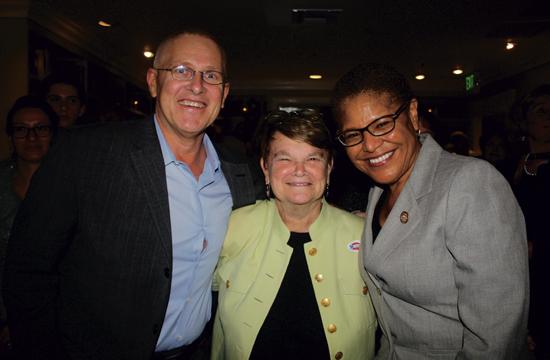 Kuehl claimed victory with 52.78 percent of the polled vote at 114,348, ahead of Shriver’s 47.22 percent, 102,319 votes. A total of 256,268 out of 949,237 registered voters cast their vote at the polls, equating to a 26.99 percent participation rate, according to the County of Los Angeles Semifinal Official Canvass Statement of Votes Cast by Community.

Results are unofficial at this stage with votes by mail still to be counted. The complete canvass of returns is due to be completed by Dec. 2, 2014.

“I am very very grateful for the chance to work on the many issues I talked about throughout the campaign,” Kuehl said. “It’s really a privilege to have the chance to try and make a difference in the lives of 10 million people.”

She said that mobility and transit options are high on her agenda.

“I would like to see the expansion of our transportation grid, so you can easily get from your house to the light rail and from the train to your final destination easily and cheaply. I hope also to improve the quality of life and safety of the children in the County,” Kuehl said.

Kuehl’s race was a tight battle. Shriver had pulled ahead in fundraising since the June primary, with roughly $904,000 in contributions collected between July 1 and Sept. 30, compared to Kuehl’s approximately $656,000.

Kuehl’s list of endorsements seemed to outweigh Shriver’s. In addition to the backing of several dozen current and retired elected officials, including Congressman Henry Waxman, she had the endorsements of the Los Angeles County Democratic Party, the National Women’s Political Caucus of California, and Emily’s List.

“I think the voters resonated to the idea that it’s preferable to elect a person who already has experience and understanding in the many areas overseen by the County,” Kuehl said. “I have also had the pleasure of representing over 60 percent of the district in the legislature, and I think my history with voters helped me earn their support.”

Shriver had the endorsement of two of his opponents in the primary race, West Hollywood Councilman John Duran and former Malibu Mayor Pamela Ulrich, as well as Supervisor Don Knabe, former Los Angeles Mayor Richard Riordan, and dozens of other elected officials and business and community leaders.

Shriver called Kuehl early Wednesday morning to congratulate her on the result.

“Sheila was gracious in victory,” Shriver said. “We had a good conversation about our challenging and spirited campaign. After 25 debates, I know Sheila will bring strength and conviction to her service on the Board of Supervisors.”

He added the campaign had been a great experience for he and his family.

“I particularly value our new friendships and the diverse communities I have come to know,” he said.

Kuehl’s support from major unions, including the Service Employees International Union Local 721 and the Los Angeles County Federation of Labor, both of which represent county employees, drew fire from critics who said she is too closely tied to labor interests.

Kuehl, 73, noted that smaller unions endorsed Shriver and promised that she is not beholden to unions based on their backing.

“I have never personally made any policy decisions based on either labor or business attempting to exert their influence,” Kuehl said.

Kuehl argued that her 14 years of experience in the state legislature as both a Senator and Assemblywoman were the best credentials for the county job, which includes overseeing a $27 billion budget and several departments managing issues as disparate as public health, child welfare, and the county jail system.

Although the county race is non-partisan, both candidates are Democrats with a strong commitment to protecting the environment and affordable housing. They share a progressive tilt on most issues and support a plan to increase the minimum wage.