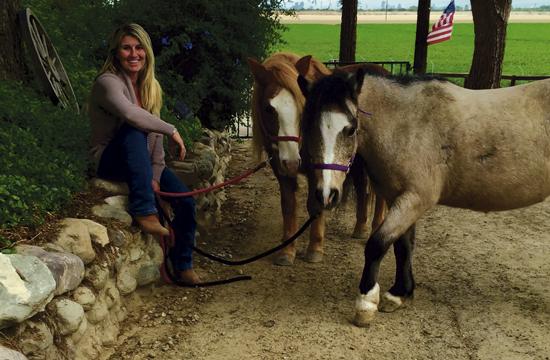 Tawnis Ponies has struck back at protestors who spent five months campaigning to oust the business from Santa Monica Farmers Markets on Main Street, by hitting them with a defamation lawsuit.

Lawyer for Ponies’ operators Tawni Angel and Jason Nester, Don Chomiak of Talisman Law, said that he has compiled a strong case against the pony-rights activists.

Documents obtained from the City of Santa Monica show that the leader of the protestors, Marcy Winograd, a former congressional candidate and local political activist, was advised in writing twice in May 2014 by City officials that there was no evidence of animal abuse after three separate inspections of Tawnis Ponies And Petting Farm, Inc. by the Santa Monica Police, according to Chomiak.

“Animal abuse is a crime – a crime my clients did not commit,” Chomiak said. “Marcy Winograd was told repeatedly by the authorities that there was no evidence of animal abuse, but she and her fellow protestors kept publicly accusing my clients of committing this crime to sway public opinion against my clients and obtain signatures on their petition to shut down the pony ride and petting zoo. They must now be held accountable.”

Winograd claims that she was acting well within her rights.

She also said that using Tawnis Ponies operators’ personal Facebook pages to prove her point, as she did, should be expected by people who work with children.

“In consultation with counsel, I intend to file an anti-SLAPP motion to protect my freedom of speech rights – and those of others who might otherwise be deterred by coercive litigation from exercising their rights – and to defend the rights of suffering animals, sentient beings with emotional lives worthy of dignity and compassion,” Winograd said.

Chamiak said animal abuse was not a matter of opinion.

“It is a crime under California’s Penal Code and has specific elements that must be met,” Chamiak said. “The police told Winograd on multiple occasions there was no evidence of animal abuse. Thus, I think my clients are very likely to defeat an anti-SLAPP motion.”

As for Ponies owner Tawni Angel, she just wants to clear her name.

“It just saddens me so much that anyone would think that I would harm my animals,” Angel said. “There is just enough money in this business to cover our expenses. We do it because we love it. I love my animals and I take incredible care of them.”

Tawnies Ponies and Petting Zoo have been operating at Santa Monica Farmers Markets for 11 years.

“By falsely accusing my clients of animal abuse and creating a controversy based on unfounded claims, the protestors may have put these animals at real risk if my clients can no longer afford to take care of the animals and are forced to sell them,” Chomiak said.

“These false allegations are the basis for the lawsuit,” he added.

“The horses appeared to be in good condition – their body weight was normal, their fur was clean and brushed, their manes and tails were brushed and healthy, the ground around them was clean and evenly flat, they walked on sawdust shavings, and there was no visible urine or feces,” the report stated. “The horses were ‘quiet’ and well behaved. I saw nothing to make me believe the horses were ill-treated, unhealthy, malnourished, injured, or in discomfort. The horses did not appear hot, were not sweating, and were on a timed (30 minute alarm) water-break schedule.”

Angel said the ponies are her family.

“I work so hard so that children can enjoy animals, so they can get close to them,” Angel said. “It’s the opposite to what the protestors are claiming.”

The exact dates of the hearing will depend on subsequent filings in the coming days.