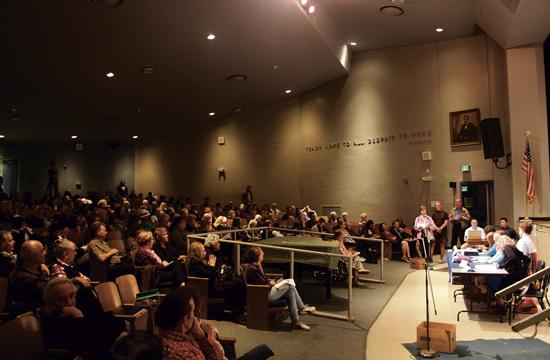 More than 200 Santa Monicans filled the Lincoln Middle School Auditorium Wednesday night to face the Planning Commission and discuss zoning issues and the recently released ordinance that outlines development guidelines for the city.

In response to the Planning Commission’s “City of Santa Monica Zoning Ordinance Update Redline Public Review Draft” the floor was turned over to the community to solicit comments, feedback, and suggestions.

Two years in the making and following a succession of community meetings and out-reach sessions, the ordinance includes changes based on solicitation from all sectors of the community, according to the City.

“We’ve reached a point – the redline,” introduced Planning Commissioner Richard McKinnon. “Are we on track, or do we need changes?…What’s the future of this city?”

With more than 50 requests to speak, residents were given around four minutes each to express their opinions with McKinnon acknowledging a sea of familiar faces in the crowd.

Predominantly slow- or no-growth, many of the speakers have been vocal at previous gatherings, in social media, and in grassroots campaigns.

“We recognize so many of you because you’ve been with us through this… it’s an intricate process,” McKinnon said.

High on the agenda for many members of the community was the proposed activity center for 14th and Wilshire in the Santa Monica Land Use and Circulation Element (LUCE).

“The activity center overlays foster dynamic spaces by enabling the creation of mixed-use development at transportation crossroads on parcels of sufficient size to support creative design, and to provide active and passive open space, affordable and market-rate housing, and shared parking facilities,” according to the City.

Countless numbers of residents spoke out at the meeting against the proposed zoning change that would see a shift in land use density and height restrictions.

“High density is not the growth we’re interested,” stated the opening speaker to resounding applause from the audience.

The anti-development tone continued throughout the evening with Mary Marlow from the Ocean Park Association (OPA) suggesting the inclusion of adaptive reuse over new development.

“Actually reuse some of the buildings rather than tearing them down,” Marlow said.

Roger Swanson from OPA reiterated Marlow’s sentiments while suggesting the addition of incentivizing neighborhood-serving businesses that have reduced parking requirements.

“Height plus density equals more traffic,” Swanson said, introducing a community-cost parameter that would see the community impacts of businesses offset with their community benefit.

Swanson is a prominent voice when it comes to traffic issues in the City, his concern regarding Lincoln Blvd. echoed by many at the meeting.

Resident Delores Sloan posed a question regarding traffic on Lincoln once the Expo line opens.

“Every five minutes there is going to be a train that crosses Lincoln,” Sloan said. “What is going to happen to all of these cars?”

Referring to the current congestion on Lincoln Blvd. exiting and entering the I-10 freeway that faces residents on a daily basis, Sloan sited the development slated for the current Denny’s site on Lincoln and called for a “reconsideration on what everyone considers a done deal, because this is going to be a real nightmare.”

Residocracy founder Armen Melkonians went one step further, calling out the LUCE at its foundation.

To a standing ovation, Melkonians said that the next step for his community group was to instigate legal action against the City.

“I will place an e-petition on our website,” he added. “If an EIR is not done, then Residocracy will pull a referendum.”

Resident Denise Barton called out the Planning Commission on their lack of response to community input, questioning where such feedback was reflected in the report.

“This redline zoning ordinance is nothing more than a manipulative farce,” she said.

A storyboard artist created a massive chart of the evening’s session on the stage during the meeting, highlighting the topics of highest zoning concern: commercial, standards, land use, parking, process, resource, and the LUCE.

A series of follow up meetings are scheduled through the month of December and January with residents encouraged to give feedback and comments in person, via comment cards or online at smgov.net/departments/pcd.