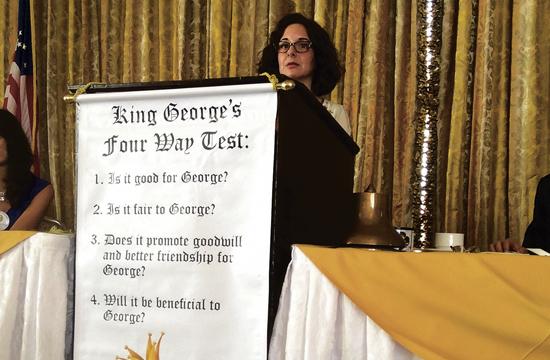 In line with Rotary’s motto “Service Above Self,” the passion and recognition of outstanding international health workers in regards to the Ebola outbreak was front and center at last Friday’s Rotary Club of Santa Monica gathering.

An internationally recognized expert and presenter on disease and epidemiology, Vassallo captured Rotarians’ attention when introducing the headline issue of Ebola.

“Among the 18,000 cases of Ebola, the numbers of deaths is just over 5,000,” Vassallo explained. “So for people in my field, this is really good news. In previous Ebola outbreaks the death rate was about 90 percent… The current death rate was about 50 percent but now it’s plummeted.”

Based at Saint Johns in Santa Monica, Vassallo and her colleagues spend a large portion of their time working on causes, treatment and prevention of a range of infectious diseases.

From the 10 Ebola cases in the U.S., two nurses acquired the disease in Dallas, Texas and according to Vassallo, the general consensus in the medical world is that the nurses became infected while removing their personal protective equipment (PPE).

“This has been the major focus of health care of the past couple of months,” said Vassallo. “When you see how difficult it is to really remove gowns and gloves without contaminating yourself, you’ll see what a difficult situation we’re in.”

Microbiologist Sarah Traquel demonstrated the challenge at the end of the Rotary meeting by putting on and then removing the required PPE for Ebola doctors, nurses and healthcare workers, providing a clear visual of just how hard the procedure is.

In terms of people carrying the disease from West Africa into Los Angeles, Vassallo said that the situation is highly unlikely. There are also no direct flights between L.A. and West Africa, so transporting patients to L.A. is also not likely to happen.

When it comes to testing the virus in the U.S., two blood samples are taken, with no definitive result possible in L.A. One blood sample is sent to L.A. County, the other to the Center of Disease Control (CDC) lab in Atlanta, before a case can be confirmed.

“We are learning as we go,” Vassallo said. “I think that’s important to keep that in mind.”

The epidemiologist sited Sengal and Nigeria as model countries when it comes to eradicating the disease after detection, stating that the U.S. has a handle on Ebola preparation and prevention.

“What’s exciting to me about Nigeria, is that they stopped it,” she said. “Their public health was so strong that after the twentieth patient there was no more… It’s one of the most populist countries in the world… Nigeria has set a great test case for us public health wise.”

“For the people I know who work in IV and infectious diseases in some way, viral hemorrhagic fevers (VHF) are a really scary thing. They’ve always intimidated me the most.

“My fear [prior to March this year] was ‘what if Ebola came to my world,’” she said. “Now it’s super-viruses.”