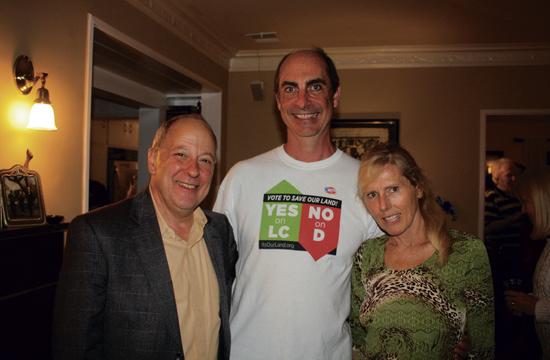 The result could move Santa Monica Airport one step closer to closure with voters agreeing to allow the council to make decisions regarding the fate of the airfield.

Voters also rejected Measure D with a 58.3 percent poll vote against the effort by aviation groups to require a public vote on any move to shutter the facility or restrict aviation activity.

Despite City officials being locked in a power struggle with the federal government over the future of the 227-acre airport, the passing of Measure LC on Tuesday’s ballot gave the City Council a vote of confidence from residents.

With 58,803 registered voters in Santa Monica, 31.8 percent casted their preference regarding LC at the ballot box.

“This means we can finally get back to normal life knowing that a terrible threat has been averted,” said John Fairweather, Chair of the Committee for Local Control of Santa Monica Airport Land (CLCSMAL), proponents of Measure LC.

“We the people now directly and fully control the possible futures of the land that is currently the Santa Monica Airport. No development can happen there without us voting for it – and we are not going to do that. I foresee only a good and green future, one that benefits all the people of this city.”

Members of the Santa Monica City Council are considering closing all or part of the airport and have already implemented or want to enact measures to restrict airplane traffic, such as limiting fuel use and noise levels.

Under Measure LC, if the airport is indeed closed, the land can only be developed into public parks, recreational facilities or open space. If any other types of development are planned, the city will be required to seek voter approval.

“The next big milestone is July 1, 2015,” Fairweather said. “On that date the City regains full power over much if not all of the airport land. All leases can be renegotiated at market rates and sub-leasing at taxpayers expense can be ended. The City can pursue environmental policies consistent with its role as one of the greenest cites in the nation.”

Proponents of Measure LC said noise and air pollution created by the Santa Monica Airport has increased by 350 percent over the years. They also said 26 airplanes affiliated with the airport have crashed, resulting in 36 deaths, since 2000.

While passing LC, poll voters also defeated Measure D, under which any plans to completely or partially close the airport or to restrict activity would have required a public vote. At the polls Measure D received 10,691 “no” votes, 58.3 percent, to 7,646 “yes” votes, 41.7 percent with a total of 31.2 percent of registered voters submitting their preference.

If both measures had reached at least 50 percent of “yes” votes, the measure with the higher number of votes would have determined the winner.

Backers of Measure D contend that city officials want to put high-rises or other dense housing development on the property, which would increase traffic and air pollution.

They also argue that any proposal to close or limit activity at the airport would affect 175 businesses and 1,500 jobs. The airport also injects $250 million into the economy each year, according to Measure D proponents.

Backers of Measure LC argue, however, that the legal language of Measure D would have prevented city officials from controlling airport activity, such as limiting fuel use and the frequency or hours of take-offs and landings.

Aviation groups, including the Aircraft Owners and Pilots Association and the National Business Aviation Association, which together donated at least $540,000 of the $824,000 raised by proponents, heavily supported measure D.

City officials are still trying to overturn an agreement the city reached with the federal government in 1948 – when the airport was returned to Santa Monica after World War II – that restricts the land to being used as an airport. City officials contend that the city bought the land in the 1920s to use as parkland.

The airport does not offer scheduled air service but is used for flight training, recreational, and private transport and other purposes.