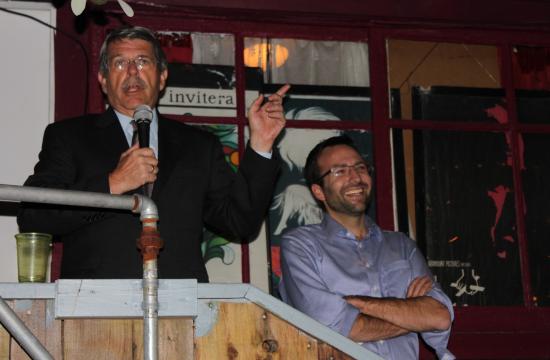 In the contest for the 26th State Senate district, Santa Monica-Malibu Unified School District Board of Education member Ben Allen defeated women’s right activist and attorney Sandra Fluke in a race where both candidates were under the age of 40.

Allen, 37, will succeed state Senator Ted Lieu in a district that includes Santa Monica and other communities on the Westside and in the South Bay.

Zaroslavsky said he rarely got involved in endorsing races, adding the only time he did was when he knew people inside and out, and had worked closely with them.

Zaroslavsky said Allen was running for the right reasons.

“The right reasons were to bring integrity, not just in a behavioral sense, but integrity in the policy making sense, integrity in the legislating sense, the kind of person who will build on the reputations of legislators who have built legacy in this part of this state.”

Zaroslavsky said he was thrilled when Allen called him earlier this year regarding the state Senate seat after Congressman Henry Waxman announced his retirement, and Ted Lieu decided to give up his state Senate seat to chase Congress.

“In a moment of great weakness, he said ‘I need to have your endorsement this weekend because the Democratic party has got something going on and your endorsement would be great, and (state Senator) Fran Pavley has endorsed’,” Zaroslavsky said. “I said ‘okay – use my name.’ It all worked out thanks to him.”

“And this candidate made an impression on the district,” Zaroslavsky said. “This state of California is lucky tonight to have elected a state Senator who is going to make a difference the minute he steps foot in that chamber.”

Allen spoke highly of his supporters, his campaign team, and his volunteers.

“I’m really going to work so hard to not let you down, to make you proud, to be someone you will have been have proud to have helped put into this position,” Allen said. “It’s an incredibly sacred position, it’s a position of public trust, and it’s an extraordinary district that is a very special one and so dear to me. This is the district where I was born and raised, this is where my family is, this is where I grew up, this is where my people are, it’s such an honor to have the opportunity to represent this district in Sacramento and also of course serve the people of the entire state of California.”

In an email to supporters on Thursday, Allen said he was honored to have the opportunity.

“Whether it’s job creation, environmental protection, investment in infrastructure, or strengthening our schools, I am ready to tackle these issues with you,” Allen said. “I hope you’ll continue to participate in the process and work with me on improving the community we treasure.”

Allen and Fluke, 33, both Democrats, came in first and second place, respectively, out of a pool of eight candidates in the June primary election.

Allen will now resign from his position on the SMMUSD Board of Education with the swearing in ceremony for the state Senate scheduled for Dec. 1.