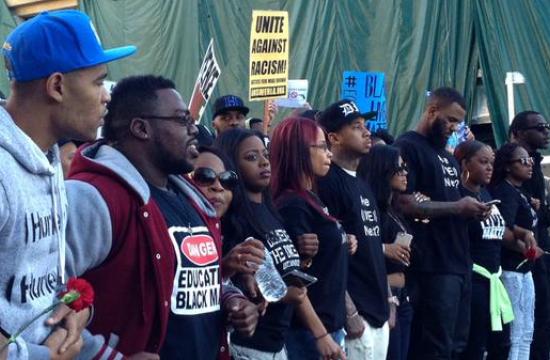 Los Angeles police blocked traffic as about 5,000 demonstrators participated in a “Millions March for First Amendment Rights” on Saturday in the Fairfax and Miracle Mile districts of Los Angeles.

Dozens of social media posts on the Internet said the march would be a peaceful protest to air claims of police misconduct in Ferguson, New York and Los Angeles.

The plan was for it to conclude at approximately 6 p.m. at South Fairfax Avenue and Beverly Boulevard.

A KNX reporter in the crowd estimated about 5,000 people were in the street, and said they paused in silence below a billboard touting the movie “Selma” and its photo of actor David Oyelowo portraying the Rev. Martin Luther King Jr.