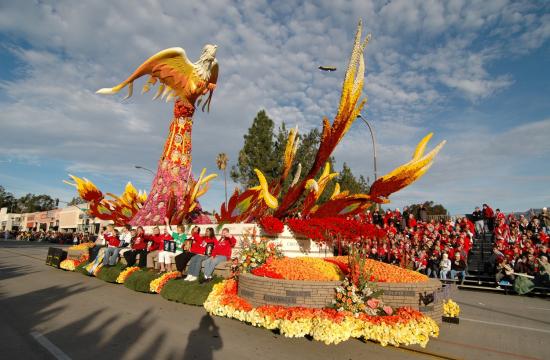 Ebola will make an appearance at the Rose Parade this year, as the AIDS Healthcare Foundation will send a float down Colorado Boulevard to honor doctors and nurses who have gone to Africa to help Ebola victims, the foundation announced today.

Two doctors working for the L.A.-based Foundation in West Africa have been killed by the disease, and the brothers and sisters of one of the doctors will ride on the float. “Protecting Global Health: Ebola First Responders” will be seen by millions as it passes by in the 126th annual Tournament of Roses Parade Thursday in Pasadena.

As part of the AIDS Healthcare Foundation’s awareness campaign, four billboards with updated Ebola death counts have been erected in the Hollywood area, as the charity has mobilized to help fight the epidemic in Africa.

The billboards feature a ticker that was originally set at 6,914 — the number of Ebola deaths in Africa at the time of the artwork’s creation two weeks ago. That total has swelled to over 7,000 since the boards were created and went up earlier this week.

The parade entry, built by Fiesta Floats, “will honor the doctors, nurses, medical assistants, orderlies and all health care and support workers — both living and deceased, anonymous or high profile — who work, or were working, tirelessly to contain Ebola,” the Foundation said in a news release.

The New York Times estimated that 546 health care workers in West Africa have been infected with Ebola, and 310 have died, as of Nov. 5.

The AHF Rose Parade float will feature a 17-foot tall rotating heart created out of over 25,000 red roses, an eight-foot-wide seeded floral globe symbolizing the global scope of the Ebola fight, and large floral portraits of Dr. Sheik Humarr Khan and Dr. John Taban Dada, who died of Ebola in Liberia and Sierra Leone this year.

Both worked for the Los Angeles-based Foundation, and Khan was considered the leading Ebola and Lassa Fever specialist in Sierra Leone. His brother, Alhajie Khan, and sisters Umu Khan and Isatu “Assie” Khan Sei, all of the greater Washington area, along with brother Sahid Khan of Philadelphia, will ride on the float.

The digital billboards have been posted along Sunset Boulevard at Cahuenga Boulevard, Van Ness Avenue and at the eastern end of Hollywood Boulevard, and at Santa Monica Boulevard at Holloway Drive in West Hollywood.