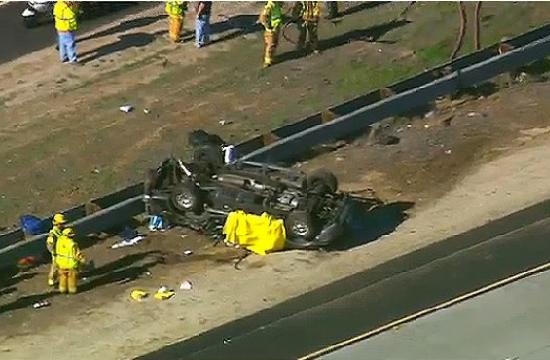 The driver and two passengers killed in a rollover crash near Fallbrook while en route to a funeral service in Mexicali were publicly identified on Saturday.

A witness driving behind the Ford Expedition said he saw a tire tread separate from a wheel on Interstate 15, just south of the Riverside-San Diego county line.

The vehicle spun out of control shortly before 12:30 p.m. Friday, according to the county Medical Examiner’s Office and the California Highway Patrol.

The SUV tumbled over a center barrier then came to rest upside down alongside the northbound lanes, investigators said.

Following the crash, medics took the SUV’s other passengers, a 2-year-old girl, the driver’s 21-year-old brother and a 43-year-old woman, to hospitals for treatment of apparently minor injuries, according to CHP Officer Jim Bettencourt.

The child is the daughter of Valeriano and Duron, who was the surviving woman’s daughter.

The group was traveling to Mexico to attend a memorial service for the oldest woman’s father, Bettencourt said.