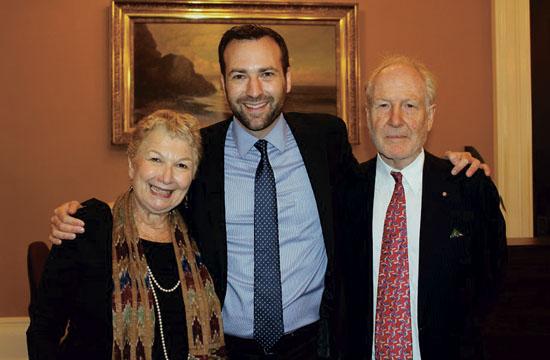 Santa Monica native Ben Allen was sworn into office at the State Capitol in Sacramento on Monday as part of the first day of the 2015-2016 Legislative Session.

The 36-year-old was elected to represent the 26th Senate District with an overwhelming majority on Nov. 4, replacing recently elected U.S. Congressman Ted Liu.

This year, 10 of the 20 Senators sworn in are newly elected, like Allen.

Allen received the endorsements from more than 200 former and current local elected officials in his campaign.

In the company of family, supporters, and friends on Monday, state Senator Ben Allen (D-Santa Monica) said he was honored to officially join the California State Senate.

He said he looked forward to working with his fellow Senators in addressing the issues and challenges that California faces.

“I recognize the responsibility that my community has bestowed upon me and will serve the 26th District with dedication and integrity,” said Allen, whose parents stood nearby.

Allen and fellow Senators were sworn in by California’s Chief Justice Tani Cantil-Sakauye, after an invocation by Father Gregory J. Boyle, S.J. of Los Angeles.

Prior to assuming office, Allen, served as a member of the Santa Monica-Malibu Unified School District Board of Education for six years, including a year as the Board’s President.

He also worked as a local attorney, taught a class on education policy and the law at UCLA Law School, and launched the Los Angeles chapter of an education nonprofit.

While in law school, Allen served as a voting member of the University of California Board of Regents and as a judicial clerk with the United Nations’ International Criminal Tribunal for Rwanda.

He holds degrees from Harvard, Cambridge, and UC Berkeley, and is fluent in Spanish.

In January, Allen will have a swearing-in ceremony in the 26th District for supporters who were unable to attend the event in Sacramento.

The California State Senate reconvenes on Jan. 5, 2015, after the holidays.

The 26th State Senate District includes Santa Monica and other communities on the Westside and in the South Bay.