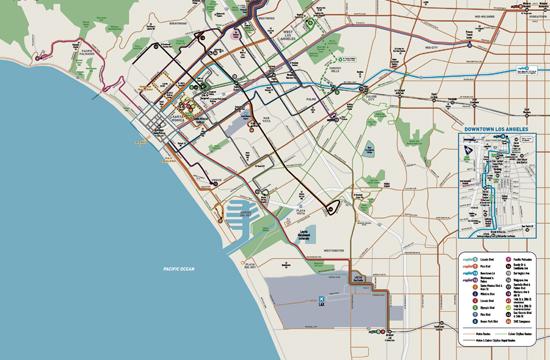 In light of the opening of the Expo line in Santa Monica and the subsequent duplication of public transit options, Santa Monica City Council gave the go-ahead Tuesday to move forward with work on a totally revised Big Blue Bus transit integration plan.

The Expo Integration Plan seeks to capitalize on the opening of seven new rail stations in the Big Blue Bus (BBB) service area, according to City staff.

All BBB operations have been examined in the service’s entirety while drafting the report said Edward King, Director of Transit Services for the City.

“I think it’s an opportunity for us to make the most significant changes in our 80 year history,” King said.

The transit director said that after nine months of public outreach, the options put forward in the Integration Plan will best service the community as a whole, while keeping a reasonable budget and personnel constraints.

“This is a significant change of conditions for a system that has served rail only at the periphery until now,” City staff stated.

Alterations of bus routes to attract new rail to bus transfers have the potential to increase ridership, make more efficient use of transit resources, and reduce overall levels of congestion, according to the report.

Stated objectives are: creating first-and-last mile connectivity; more north-south corridor service to serve the stations; reducing redundancy with other transit providers; eliminating inefficient routing; improving speed and reliability; and maximizing resources; and acknowledging that current BBB service must continue to serve markets and customers that do not interface with Expo.

The revised plan creates access to the new Expo Stations from areas to the north and south on six new routes, or new corridors on existing routes:

• Stewart to Colorado to Centinela north from Bergamot Station to Wilshire

• Sawtelle Blvd. to Sepulveda Station both north and south

An extensive public outreach program was part of the new plan. The City received over 4,600 survey responses and over 12,300 individual written and verbal comments through email, survey, public meeting, letters and workshops.

“We did a lot of survey work to gauge the interests of our customers, residents, and stakeholders here and in Los Angeles,” King explained, “what they would like to see as far as Big Blue Bus’ service, especially with the integration of Expo light rail line.”

Much was discussed during the Council meeting Tuesday, with the main concerns arising including the operation specifics of suggested new services and the removal of several lines that could result in commuters faced with an extensive walk between stations and stops and hence their reliance on cars instead.

One of the major issues of the plan is the limited times of some of the newly-proposed services Councilwoman Gleam Davis said, especially Route 43, connecting 26th Street/San Vincente with Bergamot Station and scheduled to operate from 6 am – 9 am and 3 pm – 6 pm weekdays.

“I’m afraid that we might be setting this line up to fail,” Davis said. “These hours may work well for some people, but if the service is only going to work until 5 pm, then I need to leave my office building in downtown L.A. at 4 pm, and the people who live in this area that the line is going to service, are not people who leave the office at 4 pm.”

Councilwoman Pam O’Connor echoed Davis’ concern but in regards to Line 18, which is a proposal to link Abbot Kinney/ Montana/UCLA from 6 am – 7 pm weekdays only.

She also stressed the need to keep focus on Santa Monica’s business hubs.

Projected weekday ridership for the Exposition line is 64,000 boardings per weekday as of 2030, and over 5,000 projected daily boardings at the 4th Street Terminus, according to City staff.

Staff will also return to Council during the financial years 2015 – 2017 Biennial Budget process with specific capital and staffing needs to support the projected increases.