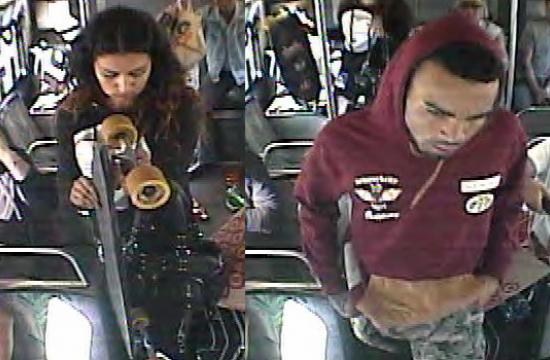 Culver City police made public today images of a young man and a female wanted for questioning in an attack on a senior citizen on city bus. The crime occurred Nov. 22 about 1:45 p.m., police said.

“The suspect, who was riding a Culver City bus with a female associate, became involved in an argument with an elderly man,” police stated. “After arguing with the elderly man for a few seconds, the suspect stood up and repeatedly punched the man several times in the head and face.”

The victim was taken to a hospital to be checked out but not seriously hurt. The suspect and the woman fled.

The suspect was described as black, in his early 20s, with a light complexion and a mustache or goatee. He wore camouflage shorts and a maroon sweatshirt with a brown pocket.

The woman was described as Hispanic, in her early 20s, with dark hair.

She was wearing a black shirt and black pants, and was carrying a skateboard.