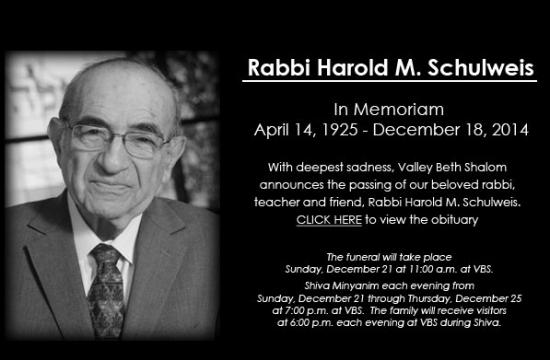 Funeral services will be held today for Valley Beth Shalom Rabbi Harold M. Schulweis, who was considered one of the most influential synagogue leaders in the country.

Schulweis, 89, died Thursday after an extended battle with heart disease. The funeral will be held at Valley Beth Shalom.

Schulweis had been a fixture at the conservative Encino synagogue since 1970, and he was credited with not only transforming its operation into a socially and spiritually active community, but with working to re-focus contemporary Judaism.

He founded the Jewish Foundation for the Righteous, which recognized Christians who rescued Jews during the Holocaust, and co-founded Mazon, a Jewish community effort to respond to hunger and poverty. He also established Jewish World Watch, a coalition of Jewish organizations working to respond to the genocide in Darfur and the Congo.

His contemporaries described him as one of the nation’s best-known rabbis. Rabbi Irving Greenberg called him “one of the great teachers of our people’s history.”

“He was my rabbi and I’ve been a member of his congregation at Valley Beth Shalom since the mid-1990s,” said Rep. Brad Sherman, D-Sherman Oaks. “As a leader in the community for over 45 years, he was an innovator that transformed the synagogue beyond a place of worship into a true community that fostered activism, counseling and charity.”

A native of New York, Schulweis was ordained as a rabbi at the Jewish Theological Seminary in 1950. After earning a master’s degree from New York University and a doctorate from the Pacific School of Religion, he served in Parkchester, New York, and Oakland before joining Valley Beth Shalom.

He authored a multitude of books, including “Evil and the Morality of God,” “For Those Who Can’t Believe, Overcoming the Obstacles to Faith,” “Embracing the Seeker” and “Conscience: The Duty to Obey and the Duty to Disobey.”

The Schulweis Institute online library at www.hmsi.info contains more than 750 audio, video and print copies of his writings, sermons and teachings.

Schulweis is survived by his wife, Malkah; sons Seth and Ethan; daughter Alyssa Reich; and 11 grandchildren.

Contributions in his honor can be made to Valley Beth Shalom, www.vbs.org/donations; Jewish World Watch, www.jewishworldwatch.org; or Jewish Foundation for the Righteous, www.jfr.org.