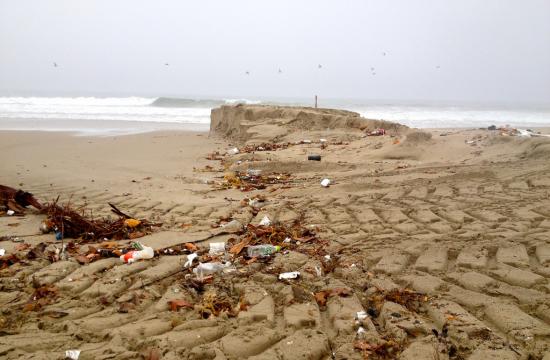 The county’s 2,800-mile storm drain system is designed to channel rainwater to the ocean to prevent local flooding. But it also has the unintended function of moving trash and bacteria-laden runoff directly into the Santa Monica and San Pedro bays following stormy weather.

Debris and toxins that have been accumulating for months on sidewalks, roadways and riverbeds are now being washed into the storm drains. Exposure to this runoff can cause a variety of illnesses, most frequently stomach flu.

There’s another equally disturbing aspect to the runoff – it’s a huge waste of a precious resource.

Los Angeles imports costly and increasingly scarce water from Northern California and the Colorado River. The region now imports more than 80% of our water, using enormous amounts of energy and capital to do so.

That 10 billion gallons of water from an average single storm in L.A. could fill nearly 120 Rose Bowls. That would provide enough water for a city the size of Santa Monica for more than three months.

“It’s depressing to see all the waste on our shorelines after First Flush,” said Alix Hobbs, president of Heal the Bay. “But it’s just as depressing to think about all that rainwater we are wasting. In a time of drought, we have to do a better job of using the water we already have.”

Heal the Bay’s science and policy team is now working closely with the city of Los Angeles to develop a funding mechanism to design and build large-scale, multi-benefit stormwater capture facilities.

Local residents contribute to debris buildup by dropping nearly 1 million cigarette butts on the ground each month, according to L.A. County Department of Public Works estimates.

Citizens walk a dog without picking up the droppings more than 82,000 times per month.

During the rainy season, Heal the Bay reminds residents that they can take steps in their own home to take pressure off an already taxed stormdrain system.

Among them: keep trash out of gutters and stormdrains, dispose of animal waste and automotive fluids properly, and limiting runoff by curtailing such wasteful practices as hosing driveways and overwatering landscapes.