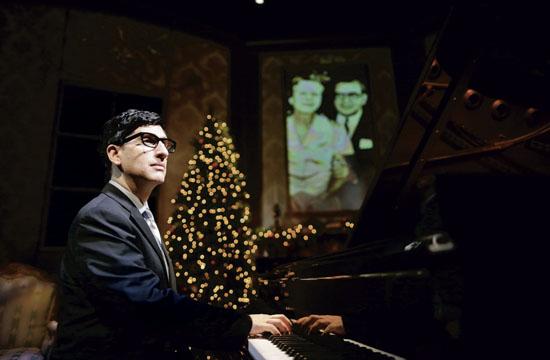 Hershey Felder is back on stage at the Geffen Playhouse with the latest in his series of one-man shows in which he re-creates the lives and times of famous composers through a biographical narrative, interlaced with the composers’ music.

What has become a franchise began in the late 1990s at the behest of Gil Cates, founder of the Geffen Playhouse, who encouraged Felder to create a piece on Irving Berlin.

Since then, Felder, an accomplished classical pianist, has used the same formulaic approach and has delighted audiences with his musical journeys into the lives of such geniuses as Frédéric Chopin, Ludwig van Beethoven, Franz Liszt, Leonard Bernstein, and George Gershwin.

At long last, fulfilling the late Cates’ request, Felder’s latest creation is the story of the Irving Berlin, one of the greatest composers of standards that comprise a large portion of “The American Songbook.”

With a lighted Christmas tree in the background, Felder’s musical journey as Irving Berlin kicks off with him seated at the piano singing the iconic “White Christmas,” explaining that the Bing Crosby version has sold more singles than any other song.

Later in the evening, it’s is one of the several audience sing-a-longs, which also included: “God Bless America,” and “Always,” his first hit.

As the young Berlin, Felder addresses an empty wheelchair where the invisible older Berlin is confined. Using a narrative of Berlin’s biography Felder, as Berlin, begins the 120-minute performance, mostly talking directly to the audience, in between playing and singing some of the composer’s most famous songs including, “Alexander’s Ragtime Band,” “Blue Skies,” and selections from “Annie Get Your Gun.”

In many instances, rear screen projections of vintage film clips depict a particular point in his long musical history.

By the time he died at 101, Berlin had written 1,500 songs, 232 of them reaching the top 10 on the music charts, with 25 number one hits. Some of film clips included, Fred Astaire in “Puttin’ On The Ritz,” and “Easter Parade,” Ethel Merman in “There’s No Business Like Show Business,” and Fred Astaire and Ginger Rogers in “We’re A Couple of Swells.” There were also clips of his family that added to the reality and poignancy of the unfolding story.

Regarding the technical aspects of the projection design by Andrew Wilder, a good portion was projected through two windows and a mirror, which were a bit small and obscured some of the images. However, the clips were much more effective and enjoyable when eventually projected onto a large, easily viewed screen.

Berlin talked about his childhood, which began in Mogilyov, part of the Russian Empire (now the Republic of Belarus). Born in 1888, he was one of eight children born to Moses and Lipkin Beilin, which eventually morphed into Berlin.

Forced to flee anti-Semitism in Czarist Russia, the family eventually settled on Cherry Street in Manhattan’s famed Lower East Side where at 14, he dropped out of school and left  the family because he thought he was a drain on their financial resources.

Felder’s Berlin reveals that at a very young age he knew his key to success was through music and he began singing and playing in beer halls on New York’s infamous Bowery, eventually working as a waiter in a beer hall whose name today would be terribly politically incorrect as it used the “N” word as in “N” Mike’s, who was actually a dark-skinned Jew.

Hershey’s character talks about his unsuccessful 1929 stint in Hollywood at the time when “talkies” were becoming popular, adding that he thought it was just a fad.

Now in his late 20s, being a patriot, Berlin recalled his stint in the service during World War I when he put on a show called “Yip, Yip, Yaphank,” which featured songs from “Annie Get Your Gun” among which were “Anything You Can Do,” and  “They Say It’s Wonderful.”  While serving in the Army, based on his dislike of the bugler, he wrote “Oh! How I Hate To Get Up in the Morning.” One of the songs he wrote during World War II was “This is the Army, Mr. Jones.” In addition, he supported the U.S. War Bond effort, raising $10 million.

Even a life as colorful and successful as Berlin’s is not without its share of heartbreak, and Felder’s narrative also takes the audience into Berlin’s personal tragedies. His first wife died at a very young age. His second marriage was to Ellin Mackay, a young socialite who married the already successful composer despite the threat of losing her inheritance from her successful father, Clarence Mackay, who referred to Berlin as that “waiter.” The death of the young couple’s infant son and subsequent death of his adored Ellin, catapulted Berlin into a deep depression and a creative slump, with his deep grieving eventually manifesting in the ballad “What’ll I Do,” one of the more poignant moments in the show. The attentive audience audibly responded not only to Berlin’s story of losing his family, but also to many of the show’s other touching moments.

Under Trevor Hay’s tight direction, Hersey Felder’s performance as Irving Berlin is his best so far. His piano playing, in particular, was much more textured than perhaps in some of his other performances, capturing the deceptively simple nuances of Berlin’s music, which underscored the crisp, compelling narrative.

His singing serviced the musical repertoire extremely well, especially in the mid and lower ranges, but his voice showed signs of strain in the upper registers and falsetto.

Although this was not in the show, one of Berlin’s famous quotes is an apt ending to this wonderful evening of theatre: “The song is ended. But the melody lingers on.”

A non-theatrical note: Given the demographics of the Geffen Playhouse’s subscriber base, which generally ranges from late-60s and older, a two-hour show without an intermission is unreasonable and resulted in many audience members leaving their seats at various times during the show to use the facility. The rule of thumb is a performance that runs over 90 minutes should have an intermission.