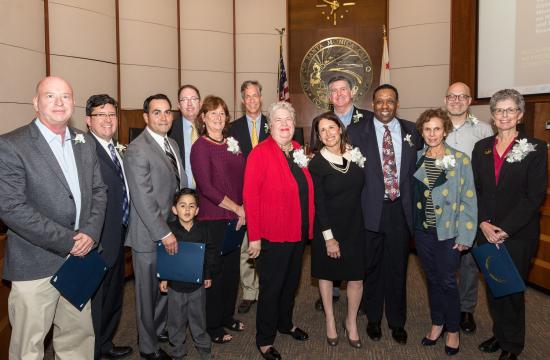 Santa Monica City Hall was filled with joy and smiling faces on Tuesday night as the top vote getters of the city’s four local election races on Nov. 4 took the oath of office.

For SMC Board of Trustees, Nancy Greenstein topped the vote by a slim margin of 20.46 percent of the vote to beat Louise Jaffe with 20.24 percent. Barry Snell came third with 16.53 percent and Andrew Walzer fourth with 15.57 percent. All four were incumbents.

For the SMMUSD Board of Education, Laurie Lieberman topped the vote with 20.75 percent of the vote ahead of Richard Tahvildaran-Jesswein (16.71 percent), Craig Foster (16.5 percent), and Oscar de la Torre (16.32 percent). Lieberman and de la Torre were both incumbents.

For Rent Control Board in which three candidates ran for the three seats, Nicole Phillis topped the vote with 37.07 percent of the vote over Steve Duron who came second with 32.10 percent and Todd Flora third with 30.83 percent. Flora was the only incumbent.