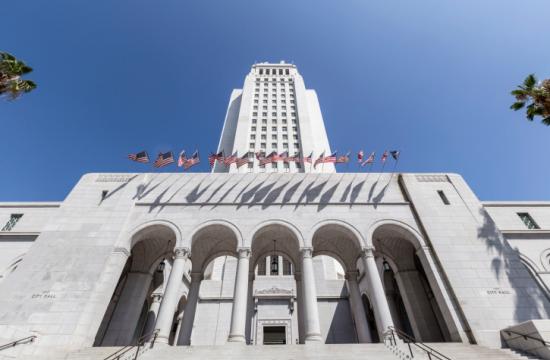 A smartphone-based service that arranges deliveries of medical marijuana was ordered by a judge on Tuesday to stop the practice in Los Angeles, with attorneys for the city arguing it violated the provisions of a voter-approved measure limiting medical pot dispensaries.

An attorney for Nestdrop said it would appeal the judge’s decision, saying its operation simply connected legitimate patients with legitimate medical marijuana dispensaries.

But the decision marked a victory for Los Angeles City Attorney Mike Feuer, who said Nestdrop was circumventing the provisions of Proposition D, which limits the number of medical pot dispensaries in the city and regulates their operation.

The order granted by Superior Court Judge Robert H. O’Brien prevents Nestdrop from taking part “in any conduct that would facilitate, aid or abet the delivery of marijuana in the city of Los Angeles.”

“Delivery of medical marijuana under Proposition D is simply not permitted, and a court validated that construction of Proposition D just about an hour ago,” Feuer said after the hearing.

The court was “very clear” in granting the order “that Nestdrop or any other app that would seek to enable medical marijuana to be delivered in Los Angeles is impermissible” under the city’s voter-approved measure, he said.

The only exceptions under Proposition D are if a patient or a caregiver is transporting the medical marijuana, Feuer said.

Feuer said other delivery services in Los Angeles are also under investigation.

Nestdrop’s attorney, Arthur D. Hodge, contends the measure does not clearly prohibit the delivery of marijuana as Feuer claims.

Proposition D prohibits the operation of medical marijuana dispensaries in Los Angeles, but gives limited immunity to about 100 businesses that registered with the city by a set deadline. Hodge said the rules that apply to this smaller pool of dispensaries the ability to operate do not include an explicit prohibition on delivery.

Hodge also argued today that Nestdrop is a third-party company, similar to eBay, that serves as middleman for patients and dispensaries.

“We respect the court, but disagree with the court’s analysis and decision,” Hodge said.

The company will “unfortunately” halt its medical marijuana deliveries in Los Angeles in response to the order, Hodge said.

Nestdrop co-founder Michael Pycher disputed the court’s ruling, maintaining that a legitimate business should be allowed to deliver, and that Nestdrop is “simply a technology company that connects patients in need with their medicine in a safe, secure manner.”

“From day one, we’ve made it clear that Nestdrop does not grow, cultivate or deliver any medical marijuana and that our qualified partners manage each of these activities,” Pycher said. “Today’s ruling does not stop the delivery of medical marijuana in Los Angeles by the dozens of delivery services in the city; it only restricts Nestdrop from communicating information between a patient and a dispensary.”

Pycher added that the company does not understand “why the city is trying to restrict law-abiding residents’ access to the medicine that has been prescribed to them by their doctors.”

“Patients use Nestdrop in order to have their medicine delivered, often because they are either too sick from their symptoms or unwilling to inconvenience a friend or loved one that would need to go to the collective on their behalf,” he said. “Nestdrop also helped to add legitimacy to an industry that needed it and we helped patients feel more secure and confident in their choices.”

Prohibiting delivery “is unnecessary and enforcement is a misuse of taxpayer funds,” Pycher argued, and the practice actually reduces “the need for storefront dispensaries in residential areas — a point of issue in Proposition D — as these services bring the medicine directly to patients, no matter the location.”

Feuer contended earlier this month that under the Nestdrop delivery service, “the combination of cash and a controlled substance at a given site is a potentially volatile combination.”

Nestdrop released a YouTube video on Friday asking supporters of the service to share their stories about how medical marijuana delivery has helped them.

Pycher said in the video that “the patients who need medical cannabis the most are the ones who might not be able to drive and therefore need it brought to them, and we can help them with that.”

“It’s time to share these stories, or the lack of understanding will continue,” he said.

Also on the video is DeWalt Mix, an amputee who said he had been taking multiple types of medications — such as Oxycontin, Oxycodone, Fentanyl and others — to relieve phantom pains in the area where his left-leg once was, but he later switched to medical marijuana edibles, which he said did a better job of relieving pain while also being “organic.”

Nestdrop began delivering medical marijuana in the area in mid-November. The company also arranges the delivery of alcohol.

Representatives of the company have said they chose to specialize in delivering alcohol because it is a highly regulated product with requirements that cannot be as easily fulfilled by general-purpose delivery services.

Motherly Mindfulness in a Pandemic

This last year has been a whirlwind for everyone, and if you’re a mother, chances are it has redefined your...

Dr. Mariano Busso, one of the world’s leading experts in cosmetic fillers and facial rejuvenation, has opened up additional appointment times...

The Pandemic of 2020: Lessons Learned

The 2020 pandemic took the country by surprise. Many people lost their small businesses, income, and quality of life. However,...

The Best Ways for Women to Get and Stay Healthy

We all want to live our happiest and healthiest lives, but it is very easy to get overwhelmed with information....