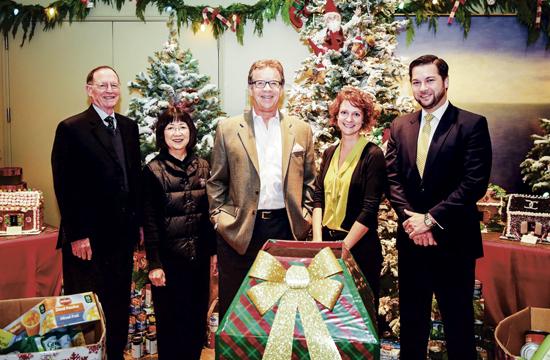 The Santa Monica community generously came together on Sunday, Dec. 14, to donate about 8,500 pounds of non-perishable food during Meet Me Under the Fig Tree, a free annual event hosted by Fairmont Miramar Hotel & Bungalows and MSD Capital.

Guests delighted in culinary offerings such as hot chocolate, grilled cheese sandwiches, and apple cider from FIG Restaurant and delectable sweet treats from Perry’s at the Beach.

A special highlight of the day occurred when the raffle prize for a two-night stay at the Fairmont Miramar hotel was won by a grateful couple who were married at the hotel 32 years ago.

Attendees were encouraged to bring non-perishable food to be donated to Ocean Park Community Center (OPCC) and Olympic High School.

In total, approximately 8,500 pounds of food was collected and will be distributed to deserving families in the community.

“One again, we are astounded and appreciative of the amount of food donated by Santa Monica residents,” said Alan Epstein of MSD Capital, representing the owner of the Fairmont Miramar Hotel & Bungalows. “During this season, when everyone is extremely busy, we appreciate that Santa Monica residents came to our event and made such a strong effort to help the less fortunate in our community. We look forward to carrying on this tradition for many years to come.”

Students of Olympic High School and representatives of OPCC gathered at the Fairmont on Monday to load the donated food items onto the their trucks.

OPCC executive director John Maceri said its organization was extremely proud to have been part of such a great event.

“In addition to directly helping thousands of individuals and families during the holiday season, we hope that this event encourages even more Santa Monica residents to help those in need,” Maceri said. “Thank you to the Fairmont Miramar Hotel and MSD Capital for creating such an annual celebration that not only benefits a good cause, but is fun for everyone who attended as well.”