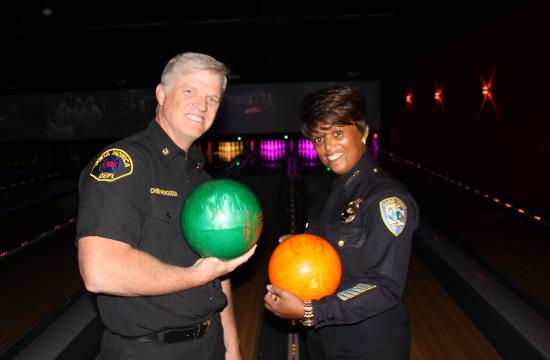 On Feb. 6, 2015 more than 750 bowlers will visit the bowling alley throughout the day and evening, representing local businesses, social service agencies, and local government, to bowl for charity.

The upcoming event is the 19th year for SuperBowl-A-Thon, which is a special fundraiser benefiting the Westside Shelter Hunger Coalition.

Proceeds benefit the coalition’s programs that strengthen services to homeless and at-risk men, women, and families through education, advocacy, and service coordination.

Ferguson said he is looking forward for his firefighters to be involved with the event.

“It’s an opportunity for the community to see the Fire Department in another light,” Ferguson said. “Obviously when you dial 911 we show up and we have a purpose, but we get to be a little bit more human when we come out here and we can mingle with friends, meet some new people, have a little competition, and have a little bit of fun.”

Seabrooks encouraged the community to get behind the event.

“What is does is promote the spirit of giving even after the holiday season because there are a lot of needy people for whom food (donations) is important, it’s important to us all, and the fact that the Police Department can participate with the Fire Department and other city partners is a really good thing,” Seabrooks said.

The annual Chiefs Challenge at the event – a “bowl off” between the Police Chief and Fire Chief – was won by Seabrooks in February this year against Ferguson with a score of 139 to 89. She claimed the trophy – and bragging rights for the year – from Ferguson who defeated her in 2013.

Ferguson said he had a new tactic going into this year’s challenge to improve his record of two wins and two losses.

“I’m looking to be three and two,” he said. “I’ve got to be honest with you, I practiced a couple of times last year. It literally popped off my thumb, bounced once in my lane, and knocked down eight of Jacqui’s pins last time. That didn’t bode well for the whole practice thing. I’m coming in cold – cold but confident.”

As part of the Chiefs Challenge tradition, the winner receives a trophy while the loser receives a bottle of ketchup.

“This year, the Fire Chief will be eating tomato soup made from the ketchup that he’ll have to take home,” Seabrooks said. “I’ll keep it classy and just say he better get used to putting a little pepper in that soup.”

To register or for more information, visit www.westsideshelter.org/sbat-forms-daytime.html.