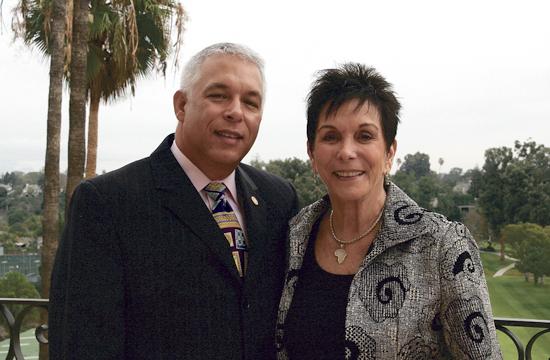 The Santa Monica Rotary Club meeting rang in the new month with some momentous happenings on Friday, Dec. 5, including an induction of a new member, a presentation of a grant, and an insightful presentation from a Rotarian guest speaker.

After the usual invocation and collective sing-a-longs, the weekly meeting commenced with an enhanced holiday spirit in the air, with members being served signature Thanksgiving dishes and discussing upcoming festivities as their tables.

To start off the afternoon of events, third generation Rotarian Brian Bohn was inducted to the Rotary Club. Not only was a valuable new member gained, but the legacy of past Rotary president and prominent Santa Monica leader John Bohn was again remembered.

The Santa Monica Rotarians also presented a grant to Evan Meyer of Beautify Earth. As an organization that “started right here in Santa Monica,” Meyer emphasized that the contribution would “really make a difference” and that it was “an honor for him to be receive the grant.”

After general club announcements regarding past and upcoming events, special guest speaker Marion Bunch took to the podium. As the CEO of Rotarians for Family Health & AIDS Prevention, a coalition that she founded and organized, Bunch was able to mobilize more than 8,000 Rotary club members in Africa with the common goal of providing free health care services to well over 343,000 people. Her deep Rotarian roots and personal history allowed her to connect with the Santa Monica Rotarians immediately.

“I don’t know if all of you are aware of it, but over the last four years, the Santa Monica Rotary Club has donated grants of $18,000 to our program in Africa,” Bunch said.

Bunch then delved into her several-year-long journey of combating and preventing HIV/AIDS, sharing the highlights of her hands-on experiences both in the States and in Africa.

“I represent the face of AIDS because I lost my son to the disease in 1994,” Bunch said. “Because of that single personal tragedy, my life’s journey has taken a dramatic change in course.”

Bunch explained the context of her circumstances back in the 1990s, which made it more of a challenge for her to initially take action.

“Back in 1994, AIDS was so discriminated against, so stigmatized,” Bunch explained. “For three years I didn’t do anything; I didn’t know what to do.”

Bunch ultimately reached an epiphany at one of her own Rotary Club meetings as she read about a past Rotary president signing a joint HIV/AIDS-related agreement with the U.N., prompting her to talk to the president of her own club and initiate a project.

Since then, Bunch has taken on numerous endeavors, including collaborating with schools to focus on youth and partnering with AIDS organizations with the hope of spreading awareness.

Bunch received the chance to travel to Africa herself through a “serendipitous moment” as she was asked to help deliver hospital equipment.

“We’ve created a vision that’s become very expanded in the last couple of years,” Bunch said as she expanded upon the concept of treating multiple diseases – “whether it’s diabetes or hypertension or cervical cancer or HIV/AIDS” – in developing countries.

With the encouragement of then-district governor-elect, Bunch led the way as the idea of Rotary Family Health Day was born. Partnered with the Centers for Disease Control and the Coca-Cola Africa Foundation, this program has developed into an annual campaign during which multiple sites are implemented in South Africa, Ghana, Uganda, and Nigeria in order to provide free health care to thousands of people.

The program served over 343,000 individuals in Africa this past April, but Bunch’s ambition is to have these services reach farther and wider.

“We are planning on expanding beyond Africa,” Bunch said. “At the end of 2015, we’ll be having a pilot in India, and we’re already considering Latin America for 2016.”