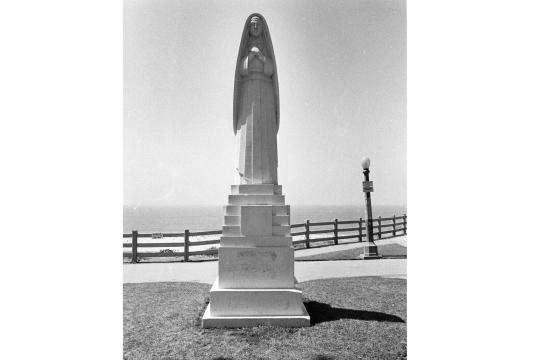 The Santa Monica History Museum is sharing a little bit of local history with the 80th anniversary of the Statue of Saint Monica in Palisades Park.

The 18-ft. high Art Deco Sculpture for whom Santa Monica was named was sculpted in 1934 by Eugene Morahan as a Public Works of Art project and presented to the citizens of Santa Monica by the Federal Government.

In an impressive unveiling ceremony at Palisades Park, it was dedicated with the hope and prayer that the figure might come to be a tower of strength to mothers everywhere.

Dignitaries present were government officials, church representatives and Morahan, the artist responsible for the creation.

The opening began with music by the Santa Monica Municipal Band and the placing of the national colors by the American Legion Color Guard and Buglers.

Mayor William H. Carter accepted the work for the City and declared the occasion to be a happy moment in the history of Santa Monica.

Santa Monica History Museum president Louise Gabriel said she learned more about the statue from her special friend Dorothy Baker, a former Palisadian who was a close friend of Morahan’s wife, Grace Putnam, creator of the Byelo Doll.

“Morahan and Grace lived at the Tennis Club on Third Street in Santa Monica where the statue was caste in the backyard,” Gabriel said. “It was to be installed during the celebration of Pioneer Day and as Morahan was under great pressure to complete his work by that deadline, he contacted his good friend and fellow sculptor, Gutzon Borglum to leave his work on Mount Rushmore and come down to help him finish his work on Saint Monica.”

The statue is high on the bluffs overlooking the Pacific Ocean. There she stands majestically to be admired by all who pass by. Some people even leave flowers at her feet as an offering.