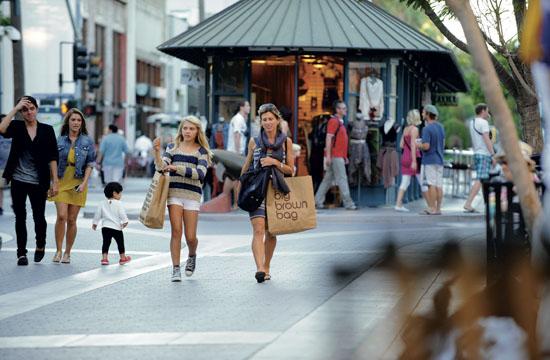 As national retailers wallow in lower-than-average Thanksgiving holiday trade, Black Friday was a boon for local merchants, capitalizing on great weather, shopper-friendly facilities, and high-end specialty stores to chalk up a positive result after a week of big sales.

Heavy-ticket items with mega-markdowns drew the most in from the streets, with international brands also cashing in on spending fever.

Downtown Santa Monica, Inc. senior communications manager Kevin Herrera said the area was bustling on Black Friday with shoppers of all ages and demographics hunting for steep discounts at their favorite stores.

“Some retailers were offering as much as 50 percent off everything in their store, which was certainly enticing for many of our visitors,” Herrara said. “I know I made out pretty well.”

“Shoppers were able to take advantage of shopping and dining alfresco in the beautiful Santa Monica surroundings,” Puccia said.

While exact local figures are still being collated, all things indicate that Downtown Santa Monica exceeded national trends this season, in part due to the strong local economy, according to Rob York, president of retail advisors York Consulting.

He puts the prediction down to a diverse customer base, a number of new retail stores and restaurants, and an enticing and active downtown experience.

“It is more than a pure shopping destination,” York said. “It is a great entertainment, dining and social gathering spot. A great environment and special events, such as the seasonal ice rink, ICE, bring local families and visitors downtown for a special experience.”

Most shoppers agree, with many choosing to steer clear from closed-in malls and their accompanying Black Friday hysteria.

“I can’t imagine lining up with hundreds of people jostling and fighting trying to get a bargain,” said shopper Gabbi Romero. “I came to Santa Monica because it’s easy to move around, the people here are nice and friendly and I knew that I would still get some great sale items.”

Romero’s husband David concurred, adding that while he was reluctant to join his wife at first, he ended up enjoying the day and had found great sale items that he didn’t expect.

“Some shops here are giving 50 percent off their already-reduced items,” he said with a grin. “It’s awesome!”

People enjoyed themselves and did not seem stressed or overwhelmed, Herrera said, explaining that many stopped to take in exercise demonstrations and live music.

New businesses and large flagship stores including Athletica and Champs, also contributed to Santa Monica sales’ success, according to the commentators.

“Downtown’s Apple store is a very strong performer and sportswear retailers such as Lululemon, Athleta, and Foot Locker are doing very well,” York said. “New products like the iPhone 6 are selling very well.”

“We saw a large volume of oversees visitors specifically from China,” Puccia said. “Our luxury retailers were pleased with many Chinese visitors making holiday purchases in their stores.”

Santa Monica residents are always the primary customer-base but Downtown is fortunate to have area employees, regional visitors and international tourists to create a very diverse clientele, according to Herrera.

National shopping trends saw Millennials top the spending charts over the Thanksgiving holiday with the Prosper Insights & Analytics survey finding 74.3 percent of 18-34 year olds had shopped or were planning to shop over the weekend, far higher than the 35-54 age group at 53.8 percent, and those 55 plus at 39.2 percent.

Adults aged 18-34 were also more likely to shop at electronics stores, and purchase clothing and accessories over the weekend, according to the survey.