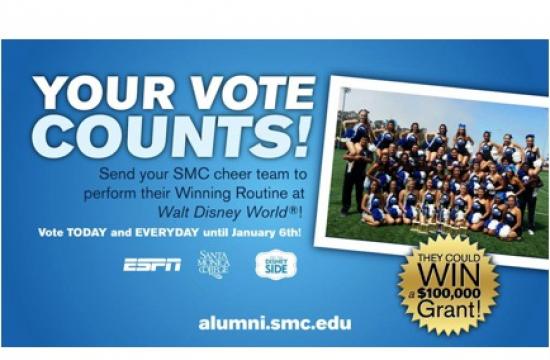 Santa Monica College’s Cheerleading Team is among the four finalists competing for a $100,000 scholarship for its spirit program, along with a trip to Walt Disney World to perform its winning routine.

The competition, organized by ESPN and Disney, invited teams from around the country to submit 30-second videos of cheerleading routines inspired by Disney themes.

More than 75 teams have participated in the competition. Santa Monica College remains the only community college among the finalists, and is going up against Auburn University, Louisiana State University, and Rutgers University.

SMC’s Cheerleading Team chose the Disney theme park classic “It’s A Small World” as the musical selection for their routine.

“This widely translated song is now heard all around the world. Our college is known for its diversity and being home to students from all corners of the globe — it was a perfect match,” said SMC Coach Jessie Moorehead, who oversees the performance cheerleading program at SMC.

Santa Monica College Cheerleading is encouraging all of its supporters to vote daily through Jan. 6, 2015 via www.ESPN.com/CheerMagic.

Voting for Santa Monica College also offers a chance to those who vote to win a trip to Walt Disney World.

Voting for SMC would mean the world to us, we are a community college and our team is a self-funded program,” Moorehead said. “A $100,000 grant would change all of our lives and help our program grow tremendously.”

The video was shot in one night and features a mixture of surrealist images and multimedia references while showcasing the physical power of the cheer team’s squad members.

“We’re up against some pretty large universities so we need lots of support if we’re going to win this grant for our program,” said Moorehead. “It’s about the college experience and our students’ education and all that prepares them for the next step.”