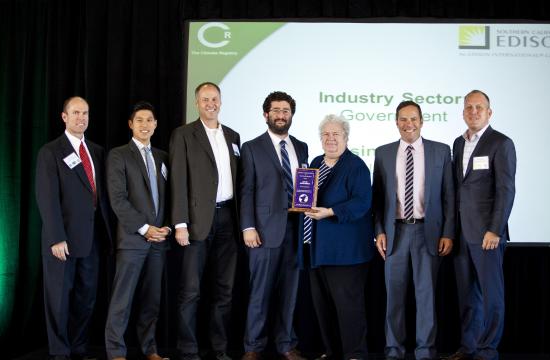 In recognition of its innovative leadership in the area of climate and energy policy, Santa Monica has received the 2014 Cool Planet Award.

A collaborative effort of Southern California Edison and The Climate Registry, the Cool Planet Awards recognize cities, universities and businesses for demonstrating exemplary leadership in energy and carbon management.

Santa Monica has adopted energy policies and applied new technologies that reduce the energy demand and climate impacts of its municipal operations.  Santa Monica was the first city in the nation to power its facilities entirely with electricity from “green” renewable sources (1999) and all new municipal buildings are designed to achieve a 10% higher performance than current statewide standards.

“Santa Monica has achieved over 2 million kWh of electricity savings annually since 2010 – the annual savings are enough to power about nine blocks of homes in Ocean Park.  That efficiency, coupled with our work to generate renewable solar energy, is going to keep giving us returns well into the future,” said Dean Kubani, Sustainability Manager for Santa Monica.