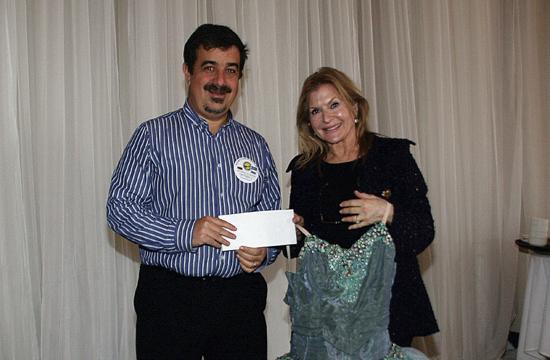 At the Dec. 12 Santa Monica Rotary Club meeting, the essence of the holiday season was certainly felt from the beginning: the members sang a Hanukkah tune in unison, the spirit of giving materialized in the form of two grants, and the club learned more about a seemingly unfamiliar part of the world.

The Santa Monica Rotarians jump-started the weekly meeting by presenting checks to grantees Kent Wallace-Meggs and Francine Lavac, with the first check set to support the academic success of young students and the second check set to contribute to a non-profit local dance training facility, the Westside School of Ballet.

To present an example of what the Rotarians’ generosity has provided on a local scale, former professional ballerina Lavac mentioned that the donations have proceeded to help purchase “some of the most beautiful costumes [she] has ever seen” and assist in melding together a polished performance.

To transition the meeting and prepare the listeners for the guest speaker, Avo Guerboian introduced the esteemed visitor, Gili Ovadia, to the club members, highlighting some of Ovadia’s numerous accomplishments and life experiences.

“[Ovadia] is the Israel consul for economic affairs to the West Coast and head of the Israel Economic and Trade mission,” Guerobian explained. “His office is responsible for enhancing trade relations between local and Israeli business communities across a broad spectrum of industries.”

In addition to currently serving at the Israeli Economy Ministry, Ovadia has also served as an advisor to the Israeli Minister of Defense, in addition to working as an analyst, being involved with two start-up companies, and serving as a combat officer for the Israel Defense Forces. Ovadia provided the Santa Monica Rotarians with a credible, experienced perspective on Israel as he informed his listeners about his country. His presentation, “Why Israel and Why Now?”, elaborated on how Israel has become a powerhouse.

Ovadia, however, focused first on the inevitable unfamiliarity with Israel that some may hold by addressing some preconceptions of the country that the media tends to highlight. He also made sure to assure the audience that they should “feel free to interrupt [him]” if they had any questions.

“When you first think of Israel, I assume you may first think about security, Middle Eastern conflict, or underdevelopment,” Ovadia said. “But we think of a very vibrant city, with tech companies, nightlife and the beach.”

Ovadia then proceeded to fill in the members on the basic facts of Israel, including its population, GOP, and names of main cities.

As he continued on to focus on the more economic and business-related statistics of Israel, it became clear that there were very apparent rising trends within the country. From the unemployment rate dropping to a record low earlier this year to the vast number of large companies choosing Israel as their research and development centers, Israel continues to be on the up-and-up, according to Ovadia.

Ovadia clarified the objective of the informative session as he wrapped up his presentation.

“We want to be here for you and to be used as a resource,” Ovadia said.

Afterward, the Rotarians showed their interest by asking Ovadia questions and engaging in further conversation.