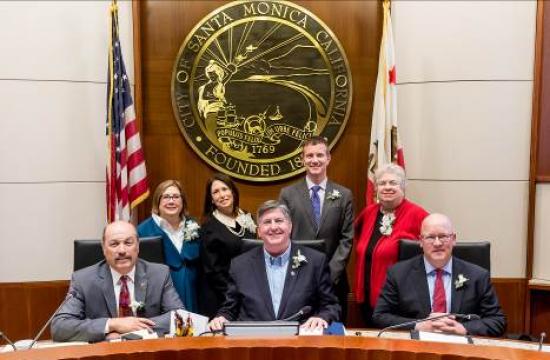 A strategic move played out Tuesday evening by Santa Monica City Council’s new slow-growth majority, with Kevin McKeown effectively taking one for the team by only being elected Mayor for one year instead of a normal two-year term.

The reason? Slow growth council members Tony Vazquez and Ted Winterer are both up for election in November 2016 – going into an election with a ballot designation of Mayor and Mayor Pro Tempore is seen as an advantage, even though the titles are largely ceremonial.

McKeown will step down from the Mayor position for the 2016 election year with Tony Vazquez to be installed as Mayor and councilman Ted Winterer to serve as Mayor Pro Tempore.

Councilwoman Sue Himmelrich, now part of the four slow growth members on City Council, made the motion for her three slow growth counterparts to serve split terms as Mayor and Mayor Pro Tempore, saying all three elected will do a great job.

“I have to say that I agree with many of the people who have talked about Kevin’s long service and I think it would be great. I have worked with Ted and Tony and Kevin… and I think that Kevin is way due for this,” Himmelrich said.

Being outnumbered, O’Connor, O’Day, and Davis all voted in favor of the slow growth majority’s motion.

McKeown said that he hopes to set a tone for public process that heals some of the divisions evident in the most recent council election.

“It has been my experience as an council member that people crave transparent information, and evidence that their personal concerns have been heard and considered,” McKeown said. “We embark now on a new phase in our civic dialogue, and I pledge to remember that listening is a key part of a successful conversation.”

At the top of McKeown’s agenda is the new Santa Monica zoning code, the expiration of the City’s Airport agreements, and the hiring of a new City Manager.

“Gaining unanimity from our Council for my election gives me great hope we can embrace our challenges as a team, on our community’s behalf,” McKeown said.

“Having Mayor Pro Tem Tony Vazquez as my partner is inspiring, because next year he will become the first Latino Mayor in our city’s history. That’s emblematic of a continuing spirit of inclusiveness and engagement in Santa Monica.”

Elected to the current council in 2012, Mayor Pro Tem Vazquez said that with both himself and Mayor McKeown at the helm, he hopes to make Santa Monica a better place for the community and local workers in particular.

“We’ve been struggling to make the city as labor friendly as possible,” Vazquez said. “I’m hope between Kevin and I we can move toward a better relationship and partnership with local working groups.”

Vazquez explained that forging strong ties with organizations such as the School and College boards, that use public money for works which require the monitoring and enforcement of Project Labor Agreement (PLA), City Council can help ensure higher working wages for laborers.

“We need to do a better job of hiring local people,” he said, adding that true affordable housing for Santa Monicans is also at the top of his priority list.

The evening also saw newly-elected Councilwoman Sue Himmelrich take her seat on the City Council dais for the first time. She replaces Bob Holbrook who did not seek re-election after 24 years of service.

“I was so happy and humbled to be part of the unanimous council that selected Kevin McKeown for his first term as Mayor and Tony Vazquez as the first Latino Mayor of Santa Monica since we incorporated in 1886,” Himmelrich said.

“All three are leaders who are famous for listening to the many voices in our City and for honoring our progressive tradition,” she said.