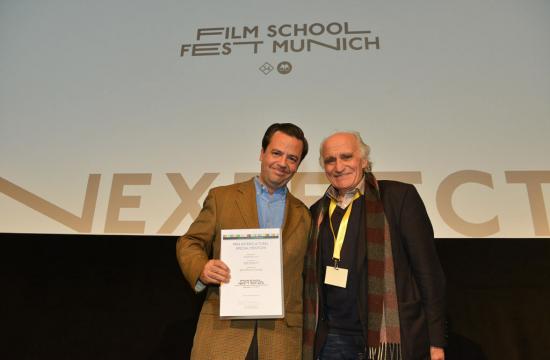 SMC was the only film school from the United States to receive an award at the festival, one of the most respected student film festivals worldwide. The other two film schools invited this year were UCLA and Chapman University.

“I am very proud of Dustin [Brown] and of SMC’s film program because we are a high-quality, low-cost alternative coherent with SMC’s educational philosophy of universal access,” said Salvador Carrasco, head of SMC’s film production program, who received the award on behalf of Solidarity’s director, former SMC student Dustin Brown.

Solidarity – the first film to come out of SMC’s film production program – has screened at many national and international film festivals including the American Pavilion at Cannes, won Best Dramatic Short at the San Diego Film Festival and was nominated for a BAFTA Award. It portrays a woman from Mexico and a man from Lithuania who struggle to make a living in Los Angeles without green cards.

In their official statement, the jury stated: With remarkable sensitivity, this film shows how lonely illegal immigrants are and how that leads to their being exploited even more.

“My goal for Solidarity was not for it to get awards or be screened at prestigious festivals,” said Brown, who is currently in the directing program at the American Film Institute Conservatory. “I wanted to create a human story about the struggles of two undocumented immigrants that hopefully would resonate with people…if it contributes to creating a dialogue about the common dignity and respect we all deserve no matter what our background, then it’s a success for me.”

Brown credits the on-set experience, production classes, and mentorship opportunities he received as a student at SMC with enlarging his understanding of narrative filmmaking.

At the FilmSchoolFest, a festival where many successful directors such as Lars von Trier (Nymphomaniac) and David Yates (Harry Potter) had their first screenings, SMC’s Solidarity competed against 46 films from 39 film schools representing 22 countries. Only ten films from eight countries received awards.

“This festival was very special because it brought together the world’s top film schools and hosted both student filmmakers and their professors with incomparable generosity,” says Carrasco. “The films screened reaffirmed that nothing matters more in cinema than having something meaningful to say in an honest and engaging way. This premise is the staple of the films we are making at SMC!”

To see more about the film production program at SMC, visit the program’s Facebook page at: www.facebook.com/SMCFilm.