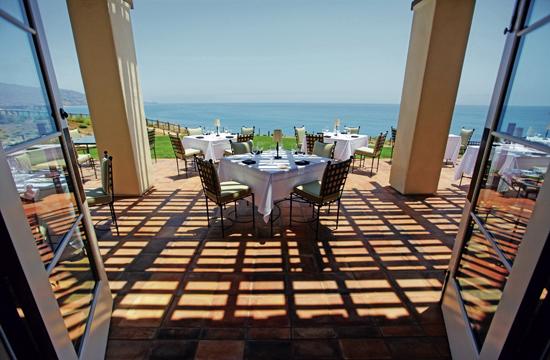 The luxurious resort, which opened in June 2009, is located just 25 miles south of the Westside on the Palos Verdes Peninsula.

For the past 18 months, Ibarra has overseen all food operations including banquets, in-room dining, and restaurants.

Ibarra brings more than 30 years of culinary and hospitality experience to Terranea Resort.

He most recently held a position at the Aria Resort & Casino in Las Vegas, where he opened and oversaw 16 on-site restaurants, in-room dining, and banquets.

“I walked into a resort that had tremendous foundations already,” Ibarra says. “It had its culture and location – what I have done for the past year-and-a-half is really implement a farm-to-table concept, to really walk the talk in the sense that we started a farming program. We started making salt out of the ocean on our coastline, we have beehives, and we use a lot of native plants and flowers that grow on property. We aim at getting as close to nature as possible and using the resources that we have on the peninsula in the region and that includes both what the earth provides us with and the ocean as well.”

Ibarra says he works closely with chefs across each of its dining outlets.

“We have more than 100 chefs,” he says. “They all have great backgrounds and really identify with the restaurant they are working in.”

Mar’sel offers a modern twist on California cuisine as inventive as its name suggests (Spanish for “sea” and French for “salt”).

Bashi offers lunch and dinner menus filled with contemporary blends of Asian flavors from acclaimed Chef Bruce Nguyen. The ‘wok’ style dishes are inspired by his heritage and fond memories of traditional meals made by his mother, weaving simple fresh ingredients into flavorful creations.

Ibarra, who was born and raised in the French side of the Basque Country, says after so many global travels, he’s happy to have ended up at Terranea.

“After so many years of working in the food business and working in many countries, I like going back to the roots… even though I’m not from here,” Ibarra says. “I was raised in the best country and a lot of product over there was used just during the seasons. Here there is great weather and there are so many things that grow here throughout the whole year. There are lots of great little producers and that reminds me of back home.”

A Taste Of Local Produce At Mar’sel

Whether fresh parsley incorporated in a special dish or rosemary in a handcrafted cocktail, the bright sun and crisp breezes in Rancho Palos Verdes are ideal for a garden to thrive.

Olalia, who joined the resort about four months ago, has transformed the restaurant’s menu, preparing eclectic dishes using California cuisine infused with his Filipino heritage.

“We try to highlight the ingredients of California as well as the bounty of the sea and the very relaxed setting in the hotel’s signature restaurant,” Olalia says. “I’ve been here for four months and we’ve gone through about 15 menu changes. We go through about two menu changes a week.”

Of the signatures dishes that have remained through the changes, Olalia says his whole baked red snapper is a popular menu item. He says it’s wrapped in banana leaf, encrusted in a salt crust, and baked before being served with coconut rice and pickled papaya salad.

He says mar’sel is one of the most unique locations he’s ever worked.

“We’re set on a hill that is so rich in vegetables and culture,” he says. “I’ve never been exposed to the sort of clientele that I’ve had here. They are just so passionate about food and about the land. We have four satellite farms and three vegetable beds next to the restaurant that’s producing fresh ingredients for the restaurant.”

He says he loves the freedom to create and connect with the clientele.

“Everybody is very approachable and they really love their cuisine,” he says. “Please give us a chance to cook for you, to taste our food, and experience Terranea in a different light. We bring forth ingredients I don’t think a lot of restaurants are using. If you like a different variety of seafood and meats and poultry, you can enjoy something from a corn bread to black and white truffles. Everything we serve here is very eclectic.”